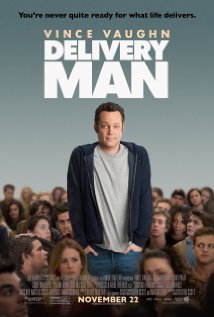 “Everybody loves you”, the fictional father of Vince Vaughn tells Vince Vaughn in Delivery Man, but he’s obviously not read the box office reports on the star’s last few movies. The public have gone lukewarm on the funny man and one can see why when he’s minded to put himself in tepid, mawkish, risk free and largely mirthless guff like this Starbuck regurgitation; the story of a once overzealous sperm donor and waster, who inadvertently sires 533 chances for redemption.

Ken Scott’s strange decision to remake his own movie for Vaughn’s audience a mere two years after the French language original isn’t without precedent but it provides a fascinating case study into the compromises filmmakers are forced to make to accommodate mainstream ticket buyers. The thinking goes that to maximise receipts one must appeal to the broadest audience imaginable and that means stripping material of anything likely to alienate the choosy; idiosyncrasies, profanity, sex, moral subversion. So what’s left? A version of Starbuck that fires blanks. Scott’s American movie doesn’t have the balls, let alone their contents, to run with a scenario that seemed destined to pervert the atrophying, cookie-cutter family movies the public’s learned to treat as the filmic equivalent of microwave meals.

Of the 533 kids ejaculated into existence by Vaughn, 130 or so want to make contact. Factor in their divergent backgrounds and the likely inefficacy of some biological mothers/foster parents/close relatives, and one would expect at least a small sample to be terrible people; murderers, rapists, thieves, social retards or serial philanderers. Instead they’ve merely got problems, things for Vaughn in his quest for personal redemption and, yawn, adult responsibility, to solve. One’s a drug addict, another’s struggling with his acting career, one’s disabled and neglected in a nursing home. Still, they’re great kids, just as Vaughn’s a great guy, and consequently the movie’s trajectory is never in doubt; its moral compass pointing north with the rigidity of a porn addict’s erection.

One can see the potential in the sub-plot in which Vaughn owes $80,000 to a bunch of bad men who, we’re shown, are happy to half-drown our man and threaten his family if he doesn’t pay up. If the movie wasn’t so straight laced and eager to placate, Vaughn might have discovered a mob connection amongst his extended family and had the loan sharks whacked, but that would be morally subversive and there’s little danger of the like in a film that bends over backwards to be sweet natured and even handed; asserting Vince’s right to anonymity while simultaneously championing the kid’s right to know their father. “C’mon, Ken,” you shout at the screen, annoying your fellow patrons, “let loose!” but he won’t and the result is a painfully dull moral fable that defaults to the family hugging creed it threatened to smash with lines like, “stop seeing your kids!”

In fact Delivery Man’s rare in one respect only; it’s a film about child rearing and parenthood that effectively excludes women, rendering them virtually invisible. Vaughn’s pregnant girlfriend Cobie Smulders is kept firmly in the background while other wives and ex-partners are kept off screen altogether. Okay, you say, this is a story about a man facing up to his responsibilities, even those imposed on him by a third party fertility clinic, but you have to feel sorry for the feminoids. This, surely, was the one arena in which they had a majority stake, an inlet to the filmic world that would give them weight and presence as primary characters, yet here the process of child rearing is effectively annexed by mankind. Yes, no one wants to see women front and centre in a comedy it seems, especially one featuring children, but they can take comfort from knowing the finished product barely qualifies as a chuckle fest and won’t register in the memories of those that saw it.

Certificate: 12A for unwanted kids, the absence of grit and too few jokes.