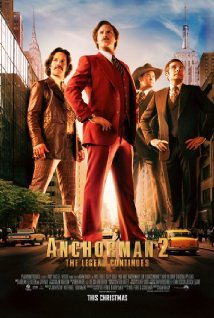 Warning: This review discusses aspects of the plot. It’s best you wait until the viewing of this title is old news before proceeding.

Anchorman: The Legend of Ron Burgundy was the Will Ferrell comedy that did what the likes of Talladega Nights and Blades of Glory couldn’t; it broke out. When cult hits rise to the top of the pop cultural swamp it’s customary for them to be go the way of Austin Powers. The bean counters smell sequel potential, only this time it’s mainstream. High profile stars are courted, product placement sought – well you’ve seen the Powers sequels, you know the horror, and meanwhile the danger that dare not speak its name, the possibility that whatever it was that made audiences fall for the original movie will be watered down, is quietly ignored.

Well good news, Anchorman 2 may have bigger name guest stars but there’s enough of what made the original work to make it feel like an organic extension of the first film. The bad news is that it’s only about 72% as funny. Perhaps a disappointment for a flick that’s been gestating for nine years.

The principle problem is the plot-as-clothesline, onto which the gags plucked from the company’s sketch tombola are hung, isn’t as strong as before. Anchorman’s trump card was it’s simple central conflict: pompous unreconstructed misogynist news anchor in the all male industry of the ‘70s battles intelligent woman and rising star gunning for his job. The sequel has to relegate poor Christina Applegate to a peripheral role, as you can’t tell the same story twice, so the prologue dispatches her to the sidelines and gives Ron new obstacles to fight. These include matinee news anchor Jack Lime, played by James Marsden’s teeth, Meagan Good’s feisty black female boss, because naturally Ron’s racially illiterate, blindness and the established orthodoxy of news reporting itself. It’s a crowded field but Burgundy vaults over these rather too easily and their collective might is nowhere near as strong or well defined as that simple battle of the sexes that, er, anchored the first film.

So what, you’re entitled to ask, is Anchorman 2 built on, if not tightly focused on Ron and those sent to poke his dinosaur attitudes? The answer is rolling news and corporate interests intruding on and redefining editorial standards. It’s an attack unlikely to upset those at Fox or keep Rupert Murdoch awake; the need to piss already taking care of that; but at least this is an absurdist comedy with a cabal of half-witted characters that makes entry level satirical observations about an everyday absurdity that many Americans take for granted.

Whether Burgundy’s idiocy effectively winning out is a smart play (whatever a tacked-on coda that covers backsides by giving the hapless anchor a damascene conversion to high journalist values says) is up for debate. There’s little doubt that it essentially reverses the trajectory of the first movie, the conclusion of which relied on Ferrell’s character making an accommodation with progress, but fuck it – it’s the truth. Idiocy has won out and news has become entertainment. The problem for McKay’s movie is that it makes for a weak conclusion. Ron may have won back his family but he’s ruined the fucking news. Remember how satisfying it was to see Ron and Veronica stand side by side at that zoo enclosure? Well don’t expect similar feelings of innate satisfaction this time around.

Structural problems aside, Anchorman 2 can, more often than not, claim to be a funny movie. If the finished product doesn’t shake shoulders, with the odd flash of wit punctuated by long periods of a likable movie that’s trying just that little bit too hard, it’s because Ferrell and McKay don’t fully understand the material difference between scenes that tell you you’re supposed to laugh; because they’re deliberately overplayed, loud or just self-consciously goofy, and jokes, which often work because they undercut a scene with a well placed one liner, a deadpan aside or are played straight, Airplane style, to mine the absurdity using understatement.

The Legend Continues is too self-conscious too often. One senses that the cast had such a great time making the movie they became desensitised to the difference between wit and self-indulgence. Ferrell and McKay just about get away with the clunkiness as long as they’re trying new variations on the theme but in the end the flick fizzles out, content to revisit some of the first movie’s greatest hits; the jokes looking thinner second time around. A third film’s still welcome but all concerned need to get better at polishing the gags and cutting the fat if they don’t want to succumb to the unforgiving law of diminishing returns.