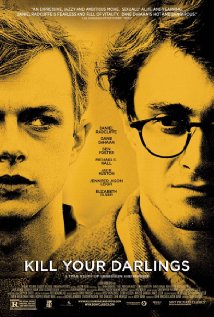 Few literary groups match the spirit of vibrant, independent filmmaking like the Beat Generation. In a period of deadening conformity and with little in the way of formal literary experimentation making it past publishers, it’s perhaps unsurprising that recent years have seen a slew of Beat movies make it to cinemas; Rob Epstein and Jeffrey Friedman’s Howl and Walter Salles’ adaptation of On the Road amongst them. Kill Your Darlings is a different beast, however. Focusing on Allen Ginsberg’s formative friendship with Lucien Carr, with the faux-classical backdrop of Columbia University a nice, stuffy challenge to the new thinking, the film focuses on the events leading to the murder of David Kammerer; a hanger-on, and possible lover of Carr, whose death marks the transition from a group of dreamers to artists touched by tragedy and real world imperatives.

Primarily this is a film about breaking out, about freedom from arbitrary constraints. The characters, spearheaded by an uncharacteristically impressive Daniel Radcliffe as Ginsberg, are either literally imprisoned; Ginsberg’s mother a mad woman in the attic, Carr locked up for murder; or figuratively so; Carr by his alleged repressed homosexuality, Ginsberg by literary convention as personified by hardnosed Shakespeare scholar Professor Steeves; Burroughs by his authoritarian father – the film dealing with their struggle to extricate themselves from these shackles.

In a movie that champions freedom of expression and having the courage to rebel against orthodox thinking, the man who emerges reeking of hypocrisy is Lucien Carr. Played with typical intensity by Dane DeHann, whose eyes should be registered as lethal weapons and regulated accordingly, Carr’s given his due as the spur for Ginsberg’s emergence from his chrysalis, but thereafter he’s an unreliable figure; guarded about the true nature of his relationship with admirer David Kammerer and later, says writer/director John Krokidas, a snake in denial of his homosexuality who reconciles his conflicted feelings toward Kammerer with murder, later using what amounts to a homophobic legal precedent, giving protection to heterosexual men fighting off unwanted gay attention, to beat the rap and commute his sentence to two years. The movie further simplifies the matter with a couple of selective postscripts; Carr marrying and having three children, Carr demanding that his dedication be removed from all subsequent editions of Howl. In short, Carr is marked as a Judas; a founding member of the Beat Generation who didn’t follow through.

That will strike some as a little neat and possibly unfair, given the maddening social oppression of the period, but it’s less about the flesh and blood Carr than using his in-movie inner-conflict and alleged moral cowardice to underline the travails of an ascendent and newly liberated Ginsberg. In the movie’s formulation it’s the Howl author and the other embryonic Beats who typify the spirit of the literary revolution; iconoclasts who ultimately had the balls to thumb their nose at the establishment. In such a dangerous adventure it’s perhaps inevitable that one person might not make it and that’s Carr’s narrative function, to show that in 1944 America the scale of the task was too great for some.

There are worst ways to celebrate the achievement but one wishes Carr’s story could have been realised with greater even-handedness. “Try starting with the second paragraph” was his alleged advice to journalists during his later years at United Press. There’s the sense here that a paragraph has indeed been skipped and therein lay all the important contextualising information that may have helped us to understand this dark footnote in American literary history.

In formal terms, Krokidas better resembles his rendering of Carr than the experimental Ginsberg. There’s cautious attempts at being playful with narrative and form; a circular plot that refers to and augments ideas about being trapped in cycles of behaviour and thought, as explored in the Beats forays into philosophy, and rhythmically varied editing; snappy like Ginsbergian verse; encompassing film that’s wound back and forth like the recollections of a drug addled mind. In this way the movie succeeds in capturing that freedom, that stream of consciousness, that characterised the movement. Okay, the desaturated photography’s a cliché; the past it seems must always fade like an old photograph; but it’s a good look and apt shorthand for a film that takes a dim view of moral tyranny during a so-called bygone age.