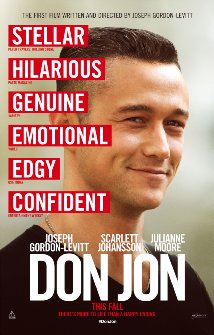 Warner Bros. reputation as a director’s studio, giving helmsmen (and women) the chance to make a movie their way, is bolstered by Don Jon, the shrewd and timely debut of Joseph Gordon-Levitt. He plays the titular Jon, a porn-addicted, preening Italian American hardon who picks up high scoring women in nightclubs but finds they fall short of the fantasy figures that bounce, grind and suck their way through his repository of online clips.

Had this simply been a film about pornography retarding male sexuality, programming young bucks to objectify feminoids while recasting them as enablers of unrealistic and ultimately unfulfilling junk sex acts, it would have paid for itself twice over, but Levitt’s film is far more daring and honest than that.

He’s created the definitive movie about male and female archetypes in the media age: how they’re created, how they warp the sexes’ expectations of each other, and how, inevitably, they lead to empty and unfulfilling relationships. It couldn’t be timelier: a film that should be compulsory viewing for all preteens, sexual content be damned, as it might just save them a lifetime of disappointment.

Barbara doesn’t want Jon cleaning his own pad, she insists on him taking night classes to improve his earning potential and watching porn’s out. The only thing he’s allowed to objectify is her. Jon in turn pays lip service to being compliant, continues to watch fuck-clips anyway and privately laments his girlfriend’s lack of insight into male sexuality. If any of this sounds like your relationship then take heed; the only solution, says Levitt, is an emotional and intellectual union with a like-mind, in this case Julianne Moore’s older widow and fellow night school student: a formula for happiness that’s predicated, and I hope you’re sitting down, on two people seeing each other as human beings with their own inner life first, men and women second.

Barbara’s never going to be satisfied with Jon because he defaults on the contract life made with her when she watched Titanic (the poster ominously hanging on her bedroom wall) and all those Disney movies in which beautiful young women are saved by romantic hunks. This, says Levitt, is the female version of Pornhub – adolescent fantasy that to soft intellects is indistinguishable from realistic expectations. Jon and Barbara’s relationship is therefore an awful sort of game in which one fantasy tries to supplant another. The result? Two losers. It’s left to Jon’s hitherto silent sister, muted in an Italian American household built on machismo and pliant women, to state the obvious: “she didn’t know anything about Jon”. To which we may add…and was never interested.

Don Jon’s note perfect commentary on the relationship politics of the daft and deluded would be reason enough to recommend it but it’s bolstered by some canny performances from Levitt and Johansson, and a hyperkinetic style that apes the very media clips in-part responsible for the movie’s world of delusion and misunderstanding. The potent lies it explores are so pernicious, one wonders if a movie, even one that presents the truth as well as Levitt’s, can hope to break the spell treasured by the disappointed lovers in the audience. Let’s hope so.