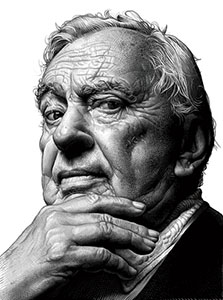 Nicholas Wrathall’s profile of the late writer, iconoclast and wit Gore Vidal, is an intimate act of biography and an undoubted highlight of this year’s London Film Festival. Vidal’s one-time heir presumptive, Christopher Hitchens, later disowned for his unflinching support for George W. Bush’s unilateral interventionism, was less enthused by his idol’s post-911 interventions. “A miserable coda” to a brilliant run was the pithy verdict. Wrathall’s film offers a miserable coda of its own; a very personal epilogue that begins, uncomfortably, with Vidal standing on his own burial plot – his companion (his euphemism) of 50 years, Howard Austen, already an owner-occupier, his gravestone ominously awaiting an end date. Hitchen’s word-strike suggested that Vidal’s legendary wit had been replaced by tired flippancy, yet his opening zinger, by way of a rebuttal, is to offer his tomb as a token of reassurance for his biographers.

It’s unquestionably a story worth telling. Vidal was the American century; the oil-thick irony being that he, more than any other witness and commentator, challenged the narrative of those years. During a period that encompassed the television commercial (for Vidal, America’s sole contribution to popular art), the telegenic politician and the most potent myth making engines ever devised, Vidal was a check on received wisdom and the herd mentality it nourished. Wrathall’s absorbing account tells of a man born into wealth and privilege, with ties to American political power and prestige – his father was the aviation pioneer Eugene Vidal, who’d later denounce his class as a ruling elite and the republic of his birth as a cradle robbing Empire, addicted, post-1941, to perpetual war in the name of perpetual peace.

Making the case that Vidal was a formidable wit and foil for corrupt politicians, charlatans and religious zealots is as tough as arguing for a spherical world. Though innately shy, he was, by his admission, addicted to the limelight – never missing an opportunity to “have sex and appear on TV”. Consequently, with a rich archive of his pronouncements, both personal and political, including famous on-air dust-ups with William F.Buckley, Jr and Normal Mailer, both of whom looked ready to kill their tormentor, Wrathall’s job amounts to cut and paste. These detractors, their trouncing immortalised, appear by way of a backhanded tribute. Only an ailing, cancer-ridden Hitchens, part way through his own miserable coda, dares to mount a veiled criticism of Vidal’s oft-contested conspiratorial view of history, though even here, it’s respectfully half-hearted.

If archive of Vidal brandishing Buckley a “crypto-Nazi” or bemoaning the loss of Ronald Reagan’s library to fire, “both books and he hadn’t even finished colouring in the second”, is a great deal of fun, the Hitchens-Vidal spat has an altogether more tragic dimension: akin to a father/son estrangement. That it carried that weight for both men is suggested by the chance capture of the older man effectively disowning him at a book signing. It’s only afterwards that we discover this was their final encounter. The crestfallen pretender realises as much with palpable hurt.  We’re invited to reflect that Vidal could still talk warmly of Jack Kennedy, despite labelling his presidency “the worst we’ve ever had” and implicating him as an enabler for the Vietnam War, yet wouldn’t give his disappointing sequel the time of day. It’s a note that captures an unspoken truth about Wrathall’s subject: Hitchens paid the price for being an adjunct of Vidal’s ego that took the neocon dime. He could understand hubris and ideological self-interest but not that.

The United States of Amnesia is a double tragedy. It’s a lament for what Vidal saw as the betrayal of the republic’s potential – a nation addicted to moneyed interests and empire building, and for the man who dissected it all as a living witness, only for fate to deign he outlive every person and principle he held dear. Hearing him talk about the final resting place of his companion and friends, watching him rattle around his Rovello home; it’s all terribly moving, yet we’re left with the sense that a long life was a necessary compliment to Vidal’s contribution to posterity. By surviving the country he was such an indelible part of for so long, he was a living reminder of what had been lost and the duty incumbent on his successors to fight for its return.