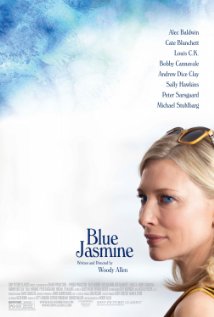 When it comes to Woody Allen nothing’s simple any more. Once we revered him, then his personal life intruded. Once his movies were consistently sublime, then they stopped working. Now we have Blue Jasmine, a pudding of a picture that works depending on which layer of this riches to rags tale you’re sampling.

On the one hand you have a movie that’s psychologically astute on top, anchored by a great central performance from Cate Blanchett, showcasing wit and interiority. On the other you have a story driven by some base assumptions: the romantic, blissfully naïve notion that an unaffected working class, though rough round the edges like Bobby Cannavale’s Chilli, are innately decent: the kind of thing they often tell themselves and sometimes believe, while the educated professional classes, social climbers like Alec Baldwin’s post-financial crisis bogeyman on legs, Hal, are dishonest and corrupt. If real life were this binary, this stark, it would be a very simple place indeed. It’s not of course and one’s inclined to think that no one knows this better than real world social climber, Woody Allen.

The bespectacled letch is on firmer ground when invading the heads of his characters, though even here there’s a compulsion to stratify. If the fallen Jasmine is significantly less likely to find happiness than her earthy and unpretentious sister, Ginger, it’s because the latter has accepted her innate ordinariness: she aspires to nothing more than motherhood, sex and domesticity.  Jasmine, by contrast, has internalised her mother’s mythologizing: the idea that she’s of superior breeding and taste. That both women are adopted adds another dimension. Allen suggests that both sisters need the same thing – to be loved and looked after. If Jasmine’s doomed it’s because her prescription for solving the problem is built on self-importance. She’s committed the cardinal sin in Woody’s eyes – she’s believed her own press.

It is a fair judgement? Audiences may be polarised. It’s clear that Allen sees Jasmine as a tragic figure: the architect of her misfortunes in more ways than one. In Blanchett’s hands she’s a psychologically dense creation: a tremulous wreck meandering through the ruin of a once opulent life. Underneath that however, there’s a not so subtle critique of the kind of character flaws ascribed to women by their embittered opposites. Jasmine’s vain, self-centred, materialistic and literally obsessed with surfaces, thanks to a love of interior design. She’s a spoilt bitch – a dreadful snob, happy to let industrious men bankroll her decadent lifestyle. She’s needy; an emotional vampire – a parasite with initialled luggage and a utilitarian view of human beings. She’s mentally ill and self-deluded. What Mia Farrow makes of all this is anyone’s guess.

Despite these question marks Blanchett’s lead performance remains a thing of beauty: it’s hypnotic and heartbreaking. The film suffers from some late-Allen maladies – the odd burst of stilted dialogue, the sense it’s sometimes a little too mannered, but the pain cuts through, while the parallel structure – Jasmine’s backstory intercut with her present day predicament, allows Allen to meter out dramatic irony for best effect. The result’s highly effective on a human level. If only the film had been set in the real world.

Certificate: 12A for Alec Baldwin, one terrible piece of CGI and two tone reality.