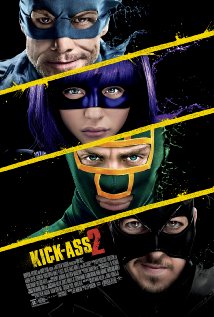 Here’s a question I thank God Nicolas Cage isn’t alive to answer: why is Kick-Ass 2 so dreadful? The first film may have dropped the ball, becoming the very super hero fantasy it had positioned itself to deconstruct in the first two acts, a mistake James Gunn conspicuously didn’t make in the superior Super, but Matthew Vaughn and Jane Goldman (super hero name: The Tits) made it fun. Their movie was profane and violent but that gruesome twosome was tempered with warmth and wit. One could exit Kick-Ass feeling that with a modicum of style, the world of the panel aficionado had been prodded; the movie having half an interest in what a real world crime fighter, steeped in fanboy culture, would face. The sequel plays like one of the first movie’s testosteronic hardons got behind the camera. The series has shifted from casting a critical eye on the super hero genre to revelling in its worst excesses.

The most important point to make about this movie is that it’s ugly. Here, I don’t refer to Jim Carrey though a single viewing is enough to understand why he chose to disassociate himself from the film. Ostensibly he flinched at the violence. Clambering onto the moral high ground minimises reputational damage. Better to build an ivory tower and start ascending than say you were duped into starring in what you later realised was a thuddingly literal, wincingly crude and unrelentingly mean-spirited celluloid sinkhole into which you’ve tossed your biggest asset – your name, further devaluing it as a marquee attraction. Yes this movie’s a nag – as brutal as ‘60’s architecture.

Jeff Wadlow, taking over from Vaughn, in what might be the worst transition since Robert Zemeckis to Lewis Teague, must shoulder the blame as his name’s on the script as well the director’s chair. Important tools for forging this kind of material are broken by the new helmsman. Subtlety? Snapped. Each scene feels like pliers to the gums. Humanity? Melted down. All the characters, friend and foe are blood thirsty, carnival grotesques. Irony? Tossed in the river. These sociopathic kids say what they mean with the upmost clunk. Style? Mothballed. Frenetic editing can’t hide moribund blocking and static camerawork. Charm? Chloë Grace Moretz smiling sweetly isn’t going to cut it when so much of the cast are working so hard to make you feel unclean.

Wadlow the writer bets the house on cranking up the first film’s gore and expletives, a gambit he hopes will satisfy the vicarious fantasies of the very defectives the first film gently satirised. Wadlow the director translates Wadlow the writer’s irony free labours with great reverence. You’re left with a legacy libel against Vaughn and Goldman that Johnnie Cochran couldn’t defend. One hopes they’ll sue anyway, if only to discourage would-be guerrilla filmmakers from picking up their own camera, taking to the streets and making Kick-Ass 3. Like a man who’s been viscously beaten by a gang of masked vigilantes, I’ve had enough.