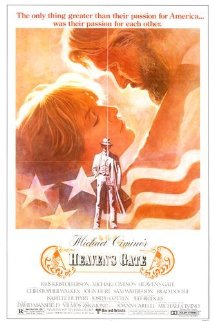 No film better represents the tension between art and commerce than 1980’s Heaven’s Gate. Today, because both nature and filmgoer alike abhor a vacuum, we’ve once again been seduced by the cult of the auteur; the romantic notion that filmmakers, like other artists, are at their best when the moneymen butt out. What do suits know about making movies anyway? Shouldn’t they just sign the cheques and book their seat at the premiere?

Kevin Smith tells a good story about how the industrial sword of Damocles effectively butchered his Superman script. It seems to many a perfect snapshot of Hollywood’s creative myopia. That filmmaking by committee has made movies worse seems so self-evident it’s almost churlish to point out that once, in the twilight years of New Hollywood, a period that had seen the likes of Martin Scorsese, Bob Rafelson and Francis Ford Coppola given great freedom to create personal pictures, one man rode slipshod over business imperatives and severed one of the industry’s great arteries.

The story of Gate’s commercial stillbirth and the subsequent selling off and dismantling of United Artists, the filmmakers sandbox created by Charlie Chaplin, Mary Pickford, Douglas Fairbainks and D.W Griffiths, is a vivid reminder that film is an industrial process that sometimes produces art, and filmmakers who forget they must serve market forces as well as their own artistic desires, become pariahs.

The whys and wherefores of how Michael Cimino’s film killed UA is a story oft told, not least by the late former head of worldwide production Steven Bach in his book Final Cut. We need only remind ourselves that a perfect storm of circumstance and executive short sightedness, as rare as a planetary alignment, allowed a filmmaker high on hubris and megalomania to abandon reverence for his paymasters and treat them as his imagination’s new sponsors.

A film that was initially budgeted at $9m, in keeping with UA’s policy of spread betting their production pot on a slate of low-mid budget pictures, came in a year late at unmarketable length with a final price tag of $44m. How could this happen? Cimino being the talk of the town after The Deer Hunter laid the ground, a company that, as Bach puts it, “did not have the structure or staff to enforce its own contractual protections without extreme disruption of routine” created the conditions that allowed a schedule to be torn up and 1.5m feet of film to be shot and printed, while a bunker mentality kept the maestro from the moneymen, ensuring that by the time Cimino presented his first contract breaching cut of 5 hours and twenty-five minutes (with the suggestion that all but a quarter hour was sacrosanct), the tumour was inoperable.

There are two Heaven’s Gate narratives that survive to this day. The first suggests it was a bloated, self-indulgent mess: a monumental folly that deserved every bit of the derision heaped upon it, rightly offending critics sensitive to the director’s pretensions. The other is that Cimino, though undoubtedly an ego on par with Kubrick and Cameron, was as industrious and gifted as either: the reviews that followed representing a backlash against the man, not a sober assessment of his labours.

The BFI’s extended run of the restored behemoth, playing throughout August, provides an opportunity to test the second version. For would-be film historians the re-release affords a rare glimpse at a movie that effectively ended the decade of Hollywood cinema that many consider its finest: the film that guaranteed the hegemony of today’s business model. It leaves you pondering the big counterfactual: had the empire of the American auteur not overextended itself so grievously would we be enjoying more Godfathers and Apocalypse Nows today? And how does Star Wars fit into that paradigm? George Lucas was one of those New Wave mavericks.

To modern eyes, with the content divested of its metatextual dimension – the opprobrium heaped on Cimino, allegations of historical inaccuracy, environmental destruction and animal cruelty – Gate’s grandeur gives it the feel of a period classic. One can reflect on the irony of so much money being needlessly wasted in a story about the deserving poor, but the film remains a study in largesse without longueurs: it’s a movie to be swept up in, a film that mitigates against its lack of narrative momentum using mood and contemplation. The first critics to lay eyes on it mistook the emphasis on the personal and painterly for self-indulgence – static naval gazing. This confuses incident with the incidental. Balls were dropped.

Heaven’s Gate is a bold epic about class conflict and vested interests. The historically inspired tale of a rich guild of cattle owners hiring mercenaries to kill poor immigrants reduced to stealing their livestock, backed by no less a man than the US president, is a blistering attack on the American dream and the self-mythologising tendency the Western was built upon. Despite this there’s no working class hero to rally audiences reared on two-tone morality. Kris Kristofferson’s Averill is a class traitor, a wealthy Harvard man with a taste for the proletariat, whose relationship with bordello madam Isabel Huppert emotionally invests him in their plight. Add a third side to the relationship, in the form of Christopher Walken’s hired gun, one of the association’s bounty hunters, and you’ve got a movie with a compelling heart: a film in which drama and conflict is generated through characters’ intersecting interests rather than set piece action.

The 216 minute version is not without its problems. The cacophonous roar of the Wyoming townscape still drowns out character’s voices, a problem that remains uncorrected after 33 years, and it’s tempting to scoff at Cimino’s legendary perfectionism when corpses breathe and dead eyes start to close, but one can forgive anything but boredom and the good news is that this final cut grips throughout, engaging with the interiority of its principle characters, the majesty of its exteriors and a social conscience that informs a cogent attack on orthodox American thought. It is in short, something of an anti-Western: a frontier movie in which the huddled, starving masses are marked for extermination. When Cimino demonised the Viet Cong they gave him an Oscar. When the same sense of moral outrage was vested on the US it destroyed his career. By a coincidence the highest grossing movie of 1980 was The Empire Strikes Back.

Such thoughts can’t ignore the fact that for all the protestations of modern critics, it’s not quite true that Heaven’s Gate is only a movie. The film’s a lavish monument to auteur theory: not for nothing is the director’s name emblazoned across the opening credits – as large as the title itself. What mustn’t be forgotten is that Michael Cimino’s love letter to himself came at the expense of an institution that had championed creative autonomy – that had given the likes of Blake Edwards and Woody Allen the space to develop their craft. This director held no reciprocal respect for UA. His disdain for the business part of the movie business ultimately murdered a sympathetic cash cow and made similar opportunities the exception for other filmmakers. One must consider whether any movie, no matter how finely crafted, is worth so high a price.

Decide for yourself: Heaven’s Gate plays in a digitally restored 216 minute cut at the BFI Southbank until the end of August. There’s a lot of money to recoup so tickets start at £600.

Certificate: 15 for hubris and financial mismanagement.