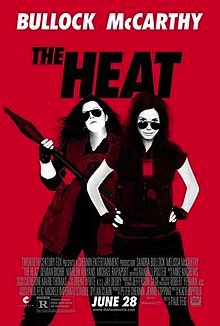 Paul Feig, director of Bridesmaids, evidently not a man to subscribe to the late Christopher Hitchens’ contention that women aren’t funny, has lamented the dearth of comedy lead roles for our sisters. His solution is to follow up his femi-centric hit with The Heat, a movie that drops two chucklesome ladies into what’s traditionally been a male genre: the buddy cop movie. It still is. Feig’s film, though fun, ironically recalls the crux of Hitchens’ argument. Women can be funny certainly, but only when aping male strategies for generating laughs. He quotes Fran Lebowitz: “The cultural values are male; for a woman to say a man is funny is the equivalent of a man saying that a woman is pretty. Also, humour is largely aggressive and pre-emptive, and what’s more male than that?”

The truth may be more nuanced and there’s no doubt whatsoever that comedy built around female experience can be very funny – which is why it would be nice to see more of it, but The Heat gives you pause, leaning heavily on aggression to mine laughs. Step forward Melissa McCarthy, not yet subjected to the indignity of an air brush diet in the film’s promotional materials, whose character, Shannon Mullins, is a sweary, shouty, gun hoarding, suspect bullying ‘tech with a bad attitude. Writer Katie Dippold attempts to cover her tracks, making Mullins the only girl in a large family of degenerate Irish-American brothers. She’s had to be tough, we learn. She presumably had no choice but to inherit all those boisterous tendencies thought to be passed on by those of Celtic descent too. But beyond the tiresome shtick that McCarthy doesn’t do quite enough to temper with wit, there’s the sense that this is a pretty thankless role for a female comedian who’s a lot funnier than this archetypal male part suggests. Add to that mix the unflattering suggestion that McCarthy’s lack of glamour and portly frame makes her a natural fit for this schlub cop, and there’s an uncomfortable assumption at play: she’s more man than woman, more masculine than feminine. And this is a movie designed to level the playing field?

The rest of the film riffs off an alternate female archetype: the uptight careerist whose refusal to be more feminine (i.e. subservient and sexualised) has made her a lonely cat lady – so lonely in fact that she’s reduced to stealing the neighbour’s cat and having herself photographed with it. The movie’s solution to Bullock’s identity crisis is to have her loosen up and emulate the shit kickin’ Mullins, thereby allowing both women to win out by emulating men.

If that wasn’t enough the film addresses the inevitable misogyny encountered by both characters, punishing the proponents with violence. For the woman-hating Albino there’s a shot to the head, for the male villain, two bullets to the dick. So much for outwitting them. You’re left with an above average buddy cop movie, a few sharp gags and the conclusion that there must be a better way to get men laughing with women than have them inhabiting written-as-male roles.

Certificate: 15 for bullets in groins, knives in legs and cat theft.