Film Review: A Field in England 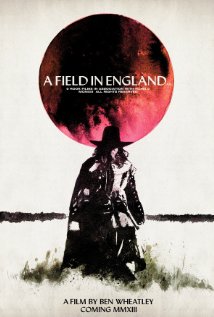 The latest from the fruitful partnership of Ben Wheatley and Amy Jump, hitherto responsible for upending genre in Kill List and last year’s Sightseers, is a phantasmagoric English Civil War trip, transposing the drug addled, mushroom induced madness usually associated with English fields at festival time, to a 17th century setting. Its unique release strategy – everywhere, instantly – sums it up. It’s a film without borders; a chiaroscuro oddity which comes close to abandoning traditional narrative altogether, emerging as a stream of consciousness.

If there’s little sense to be made of it, beyond the skeletal story of an aid co-opting three deserters from the field of battle into the hunt for an Irishman who’s stolen from his master (later found with destabilising results), then no matter. A Field in England belongs to the brain stretching, eye kneading tradition of Nic Roeg’s Performance; a film where form and content are synonymous. When Whitehead’s quarry, the malevolent O’ Neil, pulls out a scrying mirror, a divining black hole thought to reflect otherworldly manifestations of past, present and future, we realise we’ve been staring into one all along. How else to explain the characters frozen in tableau, the discomforting, disorientating sound, the kaleidoscopic visions, the lost time?

“Open up and let the Devil in!” demands Michael Smiley’s crazed Irishman, and that feels like a command levelled at the audience as much as Reece Shearsmith’s wretched servant. The devil, as ever, lies in the detail, here seasoned with psychotropic fungi. Wheatley and Jump’s enjoyable conceit – that 17th century religious ideas and superstition, bound up with group hallucination, would make for an intriguing and uniquely cinematic spectacle that could belie any low-budget constraints using creative editing, in-camera effects and sound design – is vividly realised.

What’s refreshing about Wheatley’s films is their reminder that good movies are, to use an appropriate term, successful alchemy. Wheatley’s an assured director, naturally gifted, but his collaborators are just as good. Amy Jump, his wife and three times co-writer (though solely credited with this screenplay), has undercut the film’s laboured Olde English with funny, matter-of-fact (and wholly modern) asides – “he’s saying the next time his master asks him to do something he won’t fuck it up”, is Peter Ferdinando’s rejoinder to Shearsmith’s long expression of regret. This levity assures the movie’s never too ponderous or self-involved. Martin Pavey’s inventive sound design is suitably discombobulating. James William’s scores playfully. Laurie Rose’s black and white photography is stark. The team works and so does the movie.

For the silent majority, for this organ is nothing if optimistic, who’ve yet to be tyrannised by the wearisome three act structure, where the thinking’s pre-thought and disseminated to a grateful audience with a free coke and a bag of sweets, A Field in England will be gratifying stuff – an uncanny trip to the countryside. Its mind-probing bent – Rorschach imagery and foreshadowing dialogue – force you to work, but with two and a half million unemployed that can’t be a bad thing.

Certificate: 15 for male genitalia in close up, rope burns and the great English countryside.