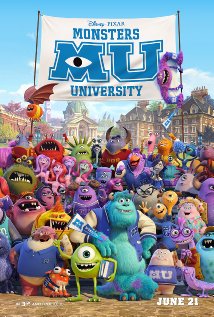 Whether it be an original, sequel, or this their first prequel, Pixar’s reassuringly (or infuriatingly) consistent in their storytelling approach. Five years and thousands of hours of painstaking computer animation, with every texture, shadow, movement and environment planned to the Nth, leaves you with something utterly inconsequential. It may be sweet, it may be lip curling, in an undemanding way, and you can bet your backside they’ll be trite lessons for the kids on morality, personal responsibility and building self-confidence, but do these movies have to be so unremittingly bland?

Amidst the efforts employed in creating clean, well crafted stories that families can enjoy together, though less so afterwards when the kids demand the related merchandise and the parents, already struggling to balance the household budget, are forced to spend money they don’t have on placating crap for their proto-consumer offspring, is their no room, or indeed time available, for giving both characters and dialogue an edge?

Monsters University is a very safe piece of entertainment. That’s needn’t be a criticism; it’s colourful, visually inventive, as you’d expect when each shot was so long in the making, and it has a cast of fun, one dimensional characters; it’s children’s animation at it’s most structured and well-crafted. What’s missing from this pixel-perfect technological miracle is any sense of spontaneity and mischief, the two things that give childhood its unique character. When movies are this confected it’s hard to feel anything bar a sense of admiration for the hundreds of technicians that worked on its formula, polishing up every facet and giving years of their lives so that not a figurative or computer generated hair was out of place. It’s a risk free endeavour in every sense; a movie built from well-worn tropes, stuffed into the best packaging money can buy.

The plot’s of little consequence – Mike and Sully overcome obstacles and learn something about themselves, becoming better monsters as a result and finding their place in the world – there’s nothing to worry about and nothing to test our tadpoles. We might question whether an animation house with such a skilled workforce would be better utilised pushing the envelope content wise, rather than making didactic filler, but that’s a decision for the suits and their bean counters. One historic note though: even Disney, the once all-powerful studio who gestated one classic after another, eventually fell on hard times and diversified into bolder fare like Tron and Return to Oz. Is it too much to hope that one day, with box office takings down and kids tiring of the same old heart warming tales, John Lasseter’s studio will dare to do the same?

Certificate: U for uniformly entertaining.