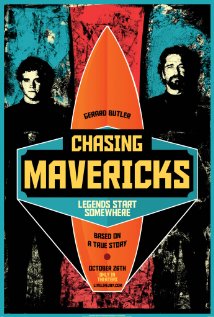 Warning: This review discusses the plot and reveals the fate of some characters.

One of the year’s most ungratifying curios is this tepid piece of real world sourced inspirationarama, which stands out for being anaemically directed by not one but two wrongheaded helmsman; Curtis Hanson, whose signature can be read in the swimwear catalogue casting, twee characterisation and choice cuts from his middling indie guitar band collection, and Michael Apted, whom one imagines directed the ocean.

Working out where Hanson ends and Apted begins is one of the few strategies an audience may employ to stay interested in what’s otherwise a lethargically paced, underpowered affair, that’s sole point of curiosity is a conspicuous lurching of tone at key moments, that speaks to either the intervention of one director in the work of another, or a demonstrable lack of storytelling nous.

What, for example, are we to make of Gerard Butler’s wife suddenly and ultimately inconsequently, collapsing and dying from a stroke? Biographically accurate perhaps but on film it’s a jolt that occurs mid-way through what we imagined was a straightforward, life imitating Karate Kid tale, of a fatherless boy getting guidance and life lessons from Butler’s grizzled surrogate. If the story pivoted on the death that’s one thing, but 5 minutes later the A-story has resumed and very much as before, leaving an audience who’d grown to like Abigail Spencer’s soft but reassuring supporting character wondering whether she’d rejected one director’s advances mid-shoot, or was sacrificed in a desperate attempt to generate drama in an otherwise moribund second act.

If her surprise death is difficult to reconcile with the rest of this anaesthetising melodrama, the news, delivered using an end title card, that the lead character perished from drowning just a few short years after his depicted triumph, leaves you somewhat morose, which in an inspirational drama is exactly the effect the filmmakers aim for.

What’s curious is the manner in which Curtis Buzzkill and Michael Aphid choose to break the news to the audience they’ve conditioned to believe in this boy’s future for two long hours. Convention holds that biopics that portray the life and death of their subject get the death out of the way first, in order to avoid ending on a low note. This makes sense because one doesn’t want to have a Chasing Mavericks moment, in which you’ve followed the struggle, seen the protagonist leap over obstacles and face down adversity, only to perish in the final 10 seconds. Of course it’s easier to foreground this moment when your subject’s well known, but nevertheless, beginning at the end and cutting back to the life and achievements is usually best practice.

Hanson does begin at the end, it’s true, Jay Moriarity submerged on what we later discover to be his final dive, but withholding the fact of his death until the last moment adds a long faced coda to a final act that had teased a promising future. He conquers the surf! He beats the bully! He gets the girl! He makes Gerard proud! He…drowns leaving his soulmate desolate and his new surrogate Dad heartbroken? And to think I had my hands open, ready to clap.

Hanson and Apted may argue, with some justification, that this is a story about seizing the day, not least because there’s little time to ride those rare monster waves, but it completes a pattern of bad decisions that suggests this was simply the last of many mistakes made in conception and execution. The case in point: the decision to cast Jonny Weston as surfer Jay. When the film begins we’re stuck with a bedimpled half-pint, Cooper Timberline, playing a younger version of the character. Our hearts sink as we imagine a long act in the company of this earnest sprite but then, in the movie’s sole moment of sanity, the filmmakers cut to the older version, just as they should. Unfortunately Weston, lifeless, dead eyed and adorned with curly blonde hair, looks like a Bond villain’s attempt at cloning a perfect human; one half of a mating pair for the new master race. The boy whose job it is to inspire and move us resembles a mannequin in a wig. Elizabeth Shue’s alcoholic mother is initially promising but is seen little thereafter; another botched chance at injecting a little drama into proceedings. Tensions between Jay and his lifelong nemesis, a bat wielding, perma-angry local, amount to a war of sanitised words in a pizza parlour in which a bell is swept off a counter. Jay’s best friend gets involved in drug dealing but the sub-plot goes nowhere. A public reading from Jay’s private journal is his only tangible setback in 2 hours.

All of which is a pity because this man against the elements drama had potential. Evidence of it lies in the wave photography; serious surf that’s audaciously filmed and conveys something of the passion and energy so conspicuously absent from dry land. Standing on the beach and watching this spectacle is star Gerard Butler, who can chalk up another dud in what’s thus far being a pretty dreadful year for the actor. When your best turn of 2013 is gurning as a spectator at the Wimbledon final it’s time to sit down and have a serious conversation with your agent. Any of Gerard’s friends reading this may wish to go one further and stage an intervention.