Film Review: Behind the Candelabra 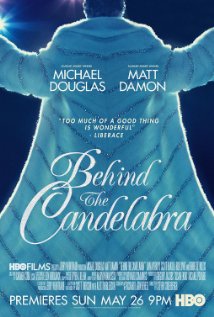 In the month that gay marriage finally cleared the last hurdle in the House of Lords, here’s a sobering tale of hypocrisy in which one gay man, the understated pianist, Liberace, counted on the non-legal status of such unions to send old boyfriends packing with little more than a token payment for services rendered.

Michael Douglas will rightly scoop the plaudits for his hairpiece-and-all portrayal of the self-styled “world’s greatest showman” but despite investing the character with great humour and appropriate levels of flamboyance, he’s not done the old ivory tinkler many favours.

Steven Soderbergh’s treatment of the relationship between the gifted entertainer and his nubile boyfriend, given a suitably naïve air by Matt Damon, paints a portrait of the man even less flattering than the ones commissioned for his palatial home. He’s a vainglorious narcissist who smells vulnerability on the 17 year old hulk of Scott Thorson, and inducts him into his home, offering to be the family he’s never had in exchange for his penis and sense of self.

The hard pianist, and it’s best not to say that after too many glasses of champagne, laments not having any children of his own, and it’s this revelation, in unguarded pillow talk, that adds a rather disturbing psychosexual complexion to his decision to refashion Scott, employing a plastic surgeon to sculpt the young man in his own image.

Before long Thorson’s addicted to weight loss pills (Liberace’s not a fan of excess body fat) and cocaine, kept on a very short leash and racked by paranoia, the words of former house boy Carlucci ringing in his ears, that the old man’s less interested in loving relationships and intimacy, more fresh meat, and that consequently Scott’s bound to go the way of his predecessors once boredom sets in. Thanks to the surfeit of knowing looks and innuendos, we have no cause to doubt Carlucci, and it’s clear that the relationship can only end one way. To Douglas and Damon’s immense credit, the journey is nevertheless breezy and fun, marked by camp and some nice comic asides, despite the fact we’re watching a person being broken in front of our very eyes.

The UK cinema release aside, this is a piece of high-end television, produced by HBO, that’s brought up by two screen-filling lead performances. Unpicking Liberace’s complicated personality, the selfishness and the sentimentality, the kept and the keeper, is no simple task but Soderbergh and writer Richard LaGravenese have done a fine job teasing out the numerous threads. A fascinating aside has the man seemingly devoted to his mother, proclaim, “I’m free” (any connection with John Inman being entirely coincidental) following her death, suggesting there’s a killing to be made for a shrewd therapist. Liberace’s a surviving twin, the other having died at birth. He’s a devout catholic despite his less than puritanical lifestyle. What this all adds up to in respect of his treatment of Thorson isn’t clear, but you’re invited to consider the implications. There’s a lot more behind the candelabra than hot tubs and scalp glue.

Ultimately this is a story of exploitation, unhappiness and fractured identity that’s absorbing throughout and maturely directed by Soderbergh in his first gig since retiring from filmmaking. Given that the director’s always managed to work within small budgets and consequently retain a degree of creative autonomy, it’s hard to understand his decision to quit. Behind the Candelabra has many of his trademarks; well cultivated performances, psychological complexity and fine drama: why then has it been made for television? The answer may be as hard to grasp as Liberace’s lifelong affections.

Certificate: 15 for Michael Douglas' scalp cap, an unappetising offer of pig in a blanket and Rob Lowe.