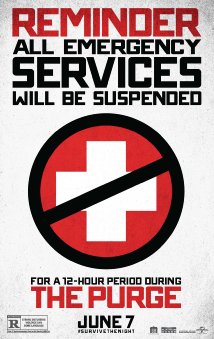 Long Dark Night of the Soul

America 2022, and the new founding fathers, whom we’re tipped came to power at a time of rampant crime and sky high unemployment, in other words the very conditions that foster the most sensible, level-headed decisions in the minds of voters (Hitler being an rare aberration), have applied some radical, blue sky thinking to solving the country’s social problems. Conventional thought would suggest that reducing inequality, creating jobs and devising policies to bring communities together would do the trick but the US government has a better idea; why not purge the Body Politic of its poison by legalising all crime for 12 hours a year, letting the rich murder the poor and every unbalanced sociopath enact bloody revenge on whomever they choose without consequence? Why not? Because it’s the worst idea ever conceived – more stupid than legalising mass gun ownership; the sort of notion dreamt up by people who’ve seen one too many movies set in the future in which a single social issue has been exaggerated to create a dystopia. It’s a world, we’re supposed to think, that’s a shadowy reflection of our own…though it isn’t really.

The Purge then, is in the tradition of Logan’s Run and Zardoz; it’s society under the microscope in a future where few have questioned the reductive, narrow mentality of the ruling elite. For Director James DeMonaco, who sounds like he should be playing tennis in the South of France rather than making a movie, it’s an opportunity to shine the light on the social tensions the rule of law keeps in check. Ethan Hawke’s done well from the annual slaughter for example; he’s sold security to all his neighbours, making them poorer while he flaunts the profits with an extension to his king sized abode. Nothing, you think, could be more American, but in this brave new world the politics of resentment can kill you. We’re alerted early on to the rictus grins on neighbours’ faces, their conspicuous decision not to invite Hawke’s brood to their annual Purge party and we await the juicy satire on polite society that’s bound to follow but sadly, DeMonaco, perhaps fearing that a ripe send up of middle class America is beyond his gifts, goes for one note social comment instead.

Hawke’s son lets a hunted homeless man into the fortified family mansion (black, in case anyone was in doubt as his symbolic nature), necessitating a rearguard action against the Manson Family-style Ivy League kids that turn up demanding their right to slay the economically inactive. Despite this disappointing turn of events there’s still the seed of a great siege movie here. Unfortunately Hawke and his feckless fam spend most of the running time wrestling with their conscience while stalking their now unwanted houseguest; time, you feel, that could have been better used, with the family quickly seeing the error of their profiteering ways, laying Home Alone style traps for the interlopers before shifting into Die Hard mode as the gun wielding gang advanced across the threshold. Such a movie might have made inventive use of a single location, built anticipation, then delivered all-action thrills in what surely would have been a monster dose of catharsis, but the film as made lacks that simple, pleasing structure and makes a meal of its feeble attempt at biting social comment.

It’s short enough and straightforward enough to make an entertaining diversion but ultimately DeMonaco’s movie lacks the courage to explore the possibilities suggested by its stoner argument conceit. Social inequality, class warfare, the effect of the entrepreneurial society on community bonds – yes, The Purge makes interesting noises, but it’s yet another barmy premise let down by lacklustre execution from filmmakers who don’t quite have the chutzpah to make the most of their ideas.