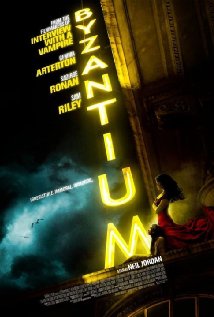 Neil Jordan’s spiritual follow-up to Interview with the Vampire has many of its hallmarks; a time spanning narrative, a melancholic air, grunge photography and a sober, more adult take on the seemingly ubiquitous leeches beloved of teens the world over. Therein lay the potential for a sombre, self-consciously arty fantasy with a patience testing glacial pace, but in telling the story of an artery-emptying call girl and her equally youth saddled daughter, Jordan’s chosen to beef up the tale with welcome drops of Mona Lisa style grit and seediness. It’s enough to make Stephenie Meyer’s ovaries implode.

Gemma Arterton’s Clara is as earthy as she is bountiful; the hardened tart who’s prepared to turn tricks and slaughter meal tickets to protect her sexless and demure vaginal refugee, played by the extraordinarily intense eyes of Saoirse Ronan, from pursuing predators. The resulting monster-mesh is part Brit crime drama, part gothic horror; a strangely hypnotic trip to a lowly seaside town that unsettles with its malevolent tone and subdued characters.

For some Arterton’s brazen hussy, more EastEnders than True Blood, may be a little too ripe, but her lively performance gives the film some heart and colour. In concentrating on the relationship between the two women, hauled up at a dilapidated hotel that probably has Harold Pinter’s name in the guest book, the threat of bereaved Mummy’s Boy and house owner Daniel Mays being drunk an all too literal possibility, Jordan’s crafted a paean to prostitution throughout the centuries or, if you’re not a bastard, man’s inhumanity to woman. Feminists looking for red meat glazed with patriarchal subjugation, including the thorny issue of reproductive rights, will find much to chew on here. The rest of us will try and stay focused on Gemma’s face, conscious that dropping the eyes hands a victory to her oppressors.

If Arterton’s titillating turn sends mixed messages, demonstrating that the male gaze, when extended by the cinematic apparatus, will always struggle to empathise with female characters, no matter what the script says, it’s even more unfortunate that Arterton and her offspring are ultimately saved by men – Mays providing the home and infrastructure for the vamp’s brothel and Sam Riley discovering his chivalric instinct at just the right moment. It just goes to prove the new adage that no matter how vibrant the imagination, imagining an end to the patriarchal formula is still a fantasy too far for most filmmakers.

Certificate: 15 for Gemma's Artertons, a seaside town that forgot to close down and Caleb Landry Jones's accent.