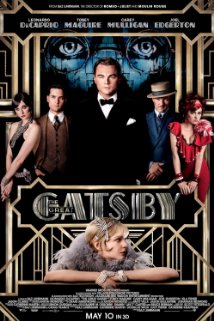 The British satirist and TV critic Charlie Brooker once joked that Baz Luhrmann’s version of the Nuremberg Trials would look something like UK dating show, Take Me Out; a line of heavily made up, overdressed dolly birds standing behind a row of back-lit lecterns that turn crimson when they hear something they don’t like. Such thoughts permeate the brain during his adaptation of F. Scott Fitzgerald’s 1925 chronicle of lost love and Jazz Age decadence. The celebrated American novel is marked by its elegant prose and acute observation of human foibles but anyone hoping this translates to a movie of great drama and interiority, in which Fitzgerald’s eponymous vulgarian and his satellites leap from the page and onto the screen, inner life in tact, hasn’t studied Luhrmann’s back catalogue. This director’s take is like Goodbye to Berlin remimagined by Elton John.

Luhrmann’s Achilles heel is his reductive mentality; a propensity to become enamoured with shiny surfaces and decorative touches, eschewing the effort required generating real drama between recognisably human characters. One can understand what caught the showman’s eye as he thumbed though Fitzgerald’s text. The champagne! The parties! The beat and throng of a playboy’s paradise in a colourful age of grand fashion and great music! For a man drawn to dazzle, dance and movement this must have been irresistible.

But no one thought to tell Baz that glitz is the mere backdrop to Gatz; the rest, the meat, is the affected characterisation, the innuendo, the sharp eyes of narrator Nick Carraway. Here, aside from those moments he’s permitted to parrot Fitzgerald’s words, he’s a wide-eyed empty vessel – a badly miscast Tobey Maguire. In place of a writer’s eye we have a musical director’s: actors who emote with all the subtlety of a toddler having a temper tantrum, a camera that’s in love in with its environs not suspicious of them, a primary colour scheme and an anachronistic soundtrack that hammers home the artifice. Fitzgerald kept this world at arms length; forever scrutinising, forever qualifying as Carraway told his tale; Luhrmann fetishises, overloads the senses, then invites you to reflect on the emptiness of it all. It’s like being taken for dinner at the Ritz only for your dinner partner to say, “great food but it’s awful here isn’t it?”

A film that rejects verisimilitude can’t hope to be the chronicle of an age and by the same token, a movie that’s suspicious of grounded emotion, opting instead for ta-da grandstanding and overt stylisation, isn’t going to cut it as drama. Leonardo DiCaprio and Carey Mulligan sweep through the film, impeccably dressed, but neither leaves a mark. How could they? They’re just part of the scenery.

Fans of Luhrmann’s Moulin Rogue, who delighted in the glam and its one note approximation of feeling, will find much to like in his Great Gatsby. Everyone else will lament the missed opportunity to mount a lavish and fitting treatment of a respected novel and wonder why the maestro didn’t just go the whole hog and rename it “Jazz Hands: A Love Story”. A bottle of your best champagne says he thought about it.

Certificate: 12A for repetition of "old sport", glitter and Beyoncé covering Amy Whitehouse.