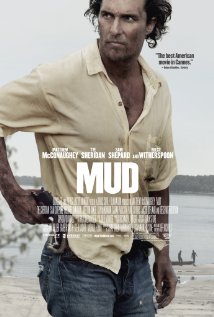 The Filth and the Fury

Context matters in a movie like Mud. The impoverished, rusted backdrop of DeWitt, Arkansas is important because, in addition to adding texture to what’s essentially a chamber piece featuring a couple of wayward teens and a hobo-cum-fugitive, it helps realign perceptions. What, for example, are we to make of Mud’s relationship with the mischievously named Juniper; an old girlfriend whose moniker is colour coded to remind us of the bruised skin on her face?

Young Ellis, with his eye on an foolhardy adolescent crush not dissimilar to that which snared the teenage Mud, an obsession we’re lead to believe was ruinous and life long, is inclined to believe the dishevelled outlaw when he spins a plausible yarn about wanting to save his beau from a bad boyfriend; a chivalric rescue that ended in murder. We’d like to believe him too, such is Matthew McConaughey’s easy Southern charm. There’s something authentic, even endearing, about his cornball philosophising and extemporised lifestyle, but this is DeWitt, where the men are either emasculated and desolate, like Ellis’ Daddy, absent, leaving a void which cut-price role models move to fill, be it Uncles or bad boyfriends, or brutal. Everyone, it seems, regardless of age, exists in a state of perpetual sexual retardation. There’s no real childhood. Men and boys, women and girls, get spoken to the same, and that matters because Mud’s childhood sweetheart is now his adult sweetheart but there’s very little evidence that the condition of their relationship has evolved with the years.

Can we therefore trust Mud’s version of events? Juniper, a sucker for male attention and the affection that comes with it, tells us that Mud’s “a liar”; Sam Shephard’s surrogate father, in carefully couched language, alludes to Juniper as the man’s undoing but is quick to check Ellis’ notion of McConaughey as a mere lovefool. “He’s no badass,” he tells us, “he’s running scared”. Mud and Juniper don’t share a single scene, except one in which a forlorn look is exchanged across a distance; there’s consequently an interesting, welcome ambiguity about their relationship.

Mud’s story may well be true, but equally he could be Juniper’s abusive boyfriend, unable to let go of his childhood love, who beats any man she shows interest in regardless of his intensions, and it wouldn’t change the narrative one bit. That bruise on Juniper’s face may have come from Mud’s victim, as he claims, but his temper, apparently impulsive and uncontrollable, could also be the culprit. Director Jeff Nichols teases us with the possibility, using Tye Sheridan’s Ellis, a boy who rushes in and beats the older boys courted by his crush, as a proxy for the eponymous man on the run.

He’s Mud in miniature, a child of the same town; the same age and temperament as McConaughey’s drifter when he set off on his destructive course. Mud’s the first to recognise the parallel and his parting words to Ellis, that he may not be the good man the boy thinks he is, echoes Juniper’s warning that there’s more to Mud than meets the lazy eye. Real mud, after all, is dirty, despoiling; it’s a little too close to shit. Nichols film pulls you close to all concerned but it’s a measure of how good it is that beneath all that, in the space between the clipped, economic dialogue, there may be an entire other movie we know nothing about. Mud’s wanted by the authorities but we’re hunting him too, searching for the real character.

Nichols’ film is low-key and intimate, steeped in Southern atmosphere. Between the natural and anthropological interpolations, shots of long legged spiders, deadly Cottonmouth snakes and a dilapidated township, there’s the exploration of a near lawless landscape; a place governed by old codes relating to the relationship between men and women, between work and family, that are enjoying their dying days. In their stead there’s uncertainty and fear, the kind of atmosphere that Nichols suggests can boil over into violence at any moment, yet this is a director who likes his characters, no matter how flawed.

Some of the film’s best scenes take place between Ellis and his Father, a man who’s lived on his wife’s property his whole adult life, failing in his patriarchal duties. Such is the grip on character exhibited by Nichols that Ray McKinnon, playing the down at heel Dad meek and sad throughout, doesn’t even manage to defend his son, though armed, when the house is besieged in the climatic shootout. In lesser movies this would have been a redemptive moment but it’s denied, perhaps because it would be too easy, an unwelcome intrusion from the world of fantasy; this is a story set in a place where people are trapped by their flaws and limitations, where boys don’t get the strong, surrogate Dads they crave, where relationships don’t have fairy tale endings, where the people we look up to aren’t the heroes we’d like them to be. If that sounds like a bleak, nihilistic prospectus, it’s strangely anything but. Instead Nichols presents us with a story that’s touching and mysterious, poignant and thoughtful; there’s even room for a glimmer of hope at the close. As Mud might say, it’s a hell of a thing.