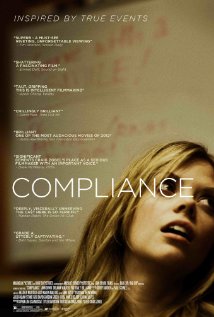 If I asked you to jump off a cliff would you do it? That’s the question we typically associate with those minded to do idiotic things just because they’re told to. Imagining we’re independent enough and sharp enough not to meekly follow orders is one of those comforting lies that gets you to sleep at night. Who wants to believe they’re a pliable stooge, who under certain circumstances could be conditioned to act against (or more terrifyingly, embrace) their nature, in contravention of their conscience and common sense? Well, Compliance, dramatising the extraordinary 2004 case of a prank phone call made to a McDonalds in Mount Washington, Kentucky – the family restaurant’s name and that of the sheep involved changed to protect the guilty – will make you think twice about your duty to think twice.

It may be inspired by true events, but the cumulative effect is to inspire you to wonder what ordinary people are capable of when they’re given the opportunity to defer responsibility for their actions to a higher authority. On this evidence, anything, and that’s without the bolt-on irony that the belligerents in this sordid, grotesque episode, ultimately convinced a jury that someone other than themselves was to blame. In a litigious culture like the United States you can always, it seems, blame the bullet manufacturer while exonerating the triggerman.

Compliance is a horror movie par excellence; the perfect companion piece to your copy of Fast Food Nation. The facts survive the transmutation to film with just the one additive – psychological shading: an addition designed to mask that bitter taste in your mouth. McDonalds shaped this movie in more ways than one.

Director Craig Zobel knows his audience won’t understand why a restaurant manager, unquestionably taking a caller at their word, would assume they were talking to a police officer, believe the hoaxer when he fingered one of her employees for theft, and agree to strip search her as a favour to the authorities – the tip of an ugly iceberg, culminating in jaw dropping scenes of sexual abuse, without a clutch of scenes that lay the ground. Consequently we get a good portion of psychological foreshadowing and innuendo.

Manager Sandra, given a matronly air by Anne Dowd, is shown tussling with her area supervisor, after an incident with a fucked freezer caused by a lapse in protocol puts her on the defensive. Becky, the prank caller’s ultimate victim, mocks her manager’s sex life within shouting distance; there’s the whiff of sexual jealously from the older woman; and so, intimates Zobel, we can better understand Sandra’s keenness to dance to the piper’s officious tune while simultaneously flexing her managerial muscles, her eagerness to believe the worst of Becky and her borderline indifference to her ordeal, once the initial discomfort at disrobing her 19-year-old employee has receded. The backdrop of a busy restaurant and the pressure from a planned mystery shopper visit is enough, suggests Zobel, (conscious that the lawyers of the real world protagonists are watching) to explain why Sandra and her subordinates had little time to think during the unfolding insanity. Do we believe him? We certainly want to; else they may as well season those fries with cyanide crystals.

Despite the psychological digging, it’s almost impossible for the casual spectator to understand how such an implausible hoax, not to mention a hoaxer who consistently fluffs his lines, managed to engineer a rape and the total abdication of decency and sense, using nothing but a telephone and shoddy improvisation. It’s clear that he’s targeted fast food employees with extreme prejudice, gambling that their low socio-economic status equaled sparing intelligence and deference to authority. What’s so depressing about Compliance is seeing that theory bare fruit: the only fruit you’ll see in this story.

Zobel doesn’t have much more respect for these burger merchants than the caller. The employees are guileless and slow-witted; their moral compass twitches but fails to point the way. It’s a faintly ridiculous, grubby environment with implausibly tall women cut off at the neck like comic grotesques and the burnt ends of fries taking centre stage in a vat of greasy, unappetising food. Given the prestigious place McDonalds holds in the gastronomic firmament and the reputation of its staff as culinary magicians, this must be something like artistic licence.

Ultimately Compliance asks some pretty awful questions but satisfactory answers there are none. The final scene puts the manager responsible for this herculean betrayal of her duty of care, in front of the TV camera. Once there, she’s shown CCTV footage that shows her ignoring Becky’s pleas to be released from her ordeal; and it’s at this juncture we realise that this feckless drone has told herself more lies than the caller managed in several hours. Memory is unreliable but so too are the self-justifying whoppers served in the cause of rationalising the irrational. An important movie then, that reminds us that we have a moral duty to be true to our conscience (if we have one) but more than that, take responsibility for our actions when we err. Food for thought.