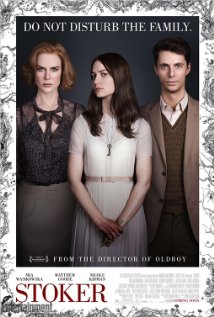 The Return of Uncle Charlie

I’d like to alienate you if I may, and guarantee your detachment from this review, by suggesting there’s something Brechtian about Park Chan-Wook’s latest. You’ll read that it’s his English language debut but the use of the vernacular is incidental; Stoker is written in the language of cinema and when utilised with this kind of skill; when it’s abrupt and changing, so as to remind us what it is, and mellifluous, as in the seamless transition between Nicole Kidman’s brushed hair and swaying long grass, it’s a thing of beauty. But I told you this was Brechtian and so it is; a film that puts a set of inverted commas around other works, from Hitchcock’s Shadow of a Doubt, to Bram Stoker’s infamous neck fetishist and adds a layer of artifice in performance, camera work and editing that ensures its audience never becomes a participant in the onscreen psycho-sexual morass.

From the moment the opening action pauses to allow for credits, you’re invited to reflect on the fact this is a movie; that there’s an invisible chasm between you and the characters. As it unfolds you’re grateful for that distance. You wouldn’t wish to identify with anyone in this film too closely…at least I don’t think so.

Hitchcock might have enjoyed the return of Uncle Charlie, once again forging an uncomfortable connection with a suspicious niece, but Stoker goes further than he dared: this time it’s Nabokovian, it’s vampiric, it’s incestuous, it’s fantastical. Chez Stoker is an erotically charged den of iniquity, where sex and evil is colour coded, where a broken neck and a piano duet can fire a girl’s dormant libido, where family can be bonded by more than mere genes. There’s something perverse and unsaid going on between the sclerotic India and her predatory next of kin. Between them, Nicole Kidman’s spare part: an unloved mother whose fragility induces jitters. You feel that her cold-hearted daughter could shatter her with a well-chosen barb. She’s a house fly being eyed by a family of spiders. Is anybody else turned on?

This is not a movie for people courting realism; it’s a feast of symbols and allusions – a film that foreshadows its best moments with verve and knows when to keep quiet. Stoker has a lapidary quality: it shines in scenes that are cold, precise and morbidly beautiful. It occupies an indeterminate territory that lies between gothic fantasy and psychological thriller. You’ve seen much of each but never combined with such cold-blooded virtuosity. For some the distance between them and the characters will be too great; the film too methodical, too conscious of its lovingly crafted manipulations, but some movies are designed to be read not watched: welcome to your 98-minute film school.

As the name of the game is temptation, it’s tempting to call this pure cinema but pure seems like the wrong word for a film that gleefully despoils its audience. Uncle Charlie is a stoker in name and by nature – he stirs some latent impulses as black as Mia Wasikowska’s hair. The ensuing perversions are, we learn, part of India’s nature; her path to emancipation – it’s enough to chill the blood but that’s okay – it’s best served chilled, right?