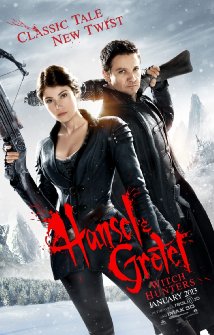 Every Witch Way But Loose

It’s hard to imagine now, but one day the human race will cease to exist. Perhaps we’ll destroy ourselves using a mega-bomb or be wiped out in an event not dissimilar to that which doomed the dinosaurs. Maybe a global suicide, organised on Facebook, will be zealously observed by a planetary populous too swept up by the hype to think about the details. We can’t know how our time will end but if the Earth endures and another species rises to assume the mantle of the world’s rulers, maybe the humble owl, then it’s reasonable to assume that remnants of human culture will survive. But what will Terra Firma’s new overlords think of us if, by some freak set of circumstances, Hansel and Gretel: Witch Hunters is all that remains of our once proud hominid civilisation?

One can imagine their confusion at what is, ostensibly, a piece of mass entertainment based on a bit of Germanic gubbins. Will they realise that this was its function, or will they assume that the juvenile tone, somewhat incongruous with the tacked-on sexuality and anaemic, CG-augmented violence, constituted some sort of mind-weapon? A piece of performance-torture, perfectly calibrated to frazzle our fragile brains? We won’t be there to explain the truth to them but this may be a blessing; who wants to tell Owl anthropologists that enough of us saw the commercial potential in this so-called adult retooling of a childhood fable, for hundreds of technicians and craftsmen to collaborate in its creation? The last of us would die of embarrassment.

To argue it’s an adult retooling is something of a misnomer of course; the target audience for this cynically defecated schlock is teenage boys. How to explain to Professor Beak of the Frogmouth Institute that human beings regarded this demographic with such unguarded contempt that they were prepared to spend millions of dollars talking down to them; assumptions made about their cognitive potential that put those hormonal miscreants in the same social category as orangutans?

How will Beak and his team reconstruct our attitude to the noble profession of acting? They’ll know of Gemma Arterton and Jeremy Renner from archived photos and written material but surely nothing will prepare them for Gretel’s aurally discombobulating voice – more Hamburger than Hamburg, or Hansel’s muted persona? Was this what the humans called characterisation? Combing the pages of The Complete Works of the Brothers Grimm, Beak’s team will be unable to find any reference to the Witch hating duo’s arsenal – their charmed machine gun, their omnidirectional crossbow or Hansel’s phallic extension. Did the actors use these props to add depth and colour to their adopted personalities? What other explanation is there?

Ultimately, after much careful analysis, Beak may decide that humans were uninterested in narrative complications, favouring acrobatic shadow boxing, the crude objectification of females and eye-stabbing spectacle. The lack of imagination – in the staging of setpieces, in the dialogue, “you’ve gotta be fuckin’ kidding me!”, in fact everywhere, would lead to the inescapable conclusion that our entertainment was degenerate and senseless and that consequently, humankind, who kept themselves busy with this retarding effluent for man-sized infants, deserved their fate. For the record, I concur.

Certificate: 15 for scenes that may harm the intellect.