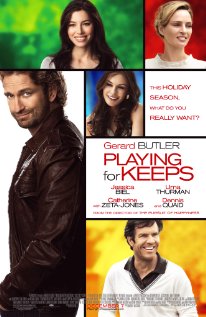 For the longest time big brands have paid exorbitant fees to have their products placed in the movies. It’s a less intrusive form of advertising than the often ill conceived or conceptually confused campaigns we’re hectored by at home. But following Playing For Keeps, brand ambassadors may want to interrogate filmmakers’ plans for their products at greater length. On this evidence they weren’t probed enough; that, or some novel associations are being tested that a generation accustomed to positive promotion may yet struggle to understand.

Both Adidas and Celtic Football Club have bravely tethered themselves to Butler’s likeable fuck up, George Dryer, a former premier footballer who’s moved to Virginia, ostensibly to be close to his ten year old son, but actually to re-woo ex-wife Jessica Biel, a woman who broke the mould by being the first astute, middle-class American backpacker ever to catch a UK footballer’s eye (they generally go for girlish subordinates with low I.Qs).

Dryer’s a bad, one time absentee father, who makes an early bid for sympathy from the Soccer Mom target audience (mocked here), taking full responsibility for the breakup of his marriage. He was an immature philanderer, we learn, but give him a chance ladies, he’s sorry and not only that, he wants to be a good Dad to the freckled cherub he once left for dead; presumably because he was spit roasting fans with team mates while his poor spouse tended Junior’s grazes.

When we meet George he’s stone-broke and strung out: a failure both privately and professionally. That, one imagines, is just the image Adidas and Celtic hoped to cultivate when they asked Butler to wear their strip. But if that’s a pair of oddments there’s stranger to come. Butler hopes to reverse his misfortune with a sportscasting job at ESPN but he’s getting nowhere until he starts to flirt with network contact, and former employee, Catherine Zeta Jones. She’s one of an increasingly desperate band of moist Moms hoping to mount Dryer before the end credits obliterate their chances and sure enough it’s only when Butler takes time out from an afternoon with his bairn to give in to her demands that his prospects start to look up. It’s not just who you know but who you’re prepared to sleep with, says the movie, that counts when applying to work for America’s premier sports network. Broadcast journalism students everywhere take note.

Perhaps Match.com will fare better with Judy Greer’s bubbly singleton and website patron, you say; another yummy mummy hoping to ensnare the Scottish lothario. Sadly, no. Judy’s a capricious airhead who’s desperate to be reacquainted with the male spring, following a long drought. It’s hard to imagine a better advertisement for Match’s customer base than an emotionally needy headcase with an unsated libido. Whatever the website paid to shore up the prejudices of the don’t knows was worth at least an ad agency’s bonus.

Ferrari, envious at the positive exposure other brands are getting, also gets in on the action. Butler is lent such a vehicle by original owner Dennis Quaid; an obnoxious, misogynist creep and former baseball star, who regularly cheats on his wife while hypocritically hiring detectives to follow her to ensure she can’t respond in kind. Any suggestion that said cars are bought by insecure peacocks with rice paper egos is therefore comprehensively debunked.

When Playing for Keeps isn’t testing you with these brand-led mixed messages, it’s crafting some of its own. What, for example, are we to think of the emotionally conflicted Biel on one hand, contrasted with a series of feminoid cartoon characters on the other? We understand that this is, at its heart, an old fashioned family restoration movie, in which interlopers and saboteurs, threatening to stop the cheating (but likable) husband being reunited with his wife and kid must be dealt with, but did Uma Thurman have to be made so needy and ridiculous, effectively wiping out all Quentin Tarantino’s good work in one fell swoop? Did poor Judy Greer need to have her performance in The Descendants cancelled out, and what was Catherine Zeta Jones’ function, beyond wrapping her legs around Butler in a half-hearted attempt at derailing the family project?

We might have relied on Gerard’s family to keep us focused and sympathetic to his cause, but Biel’s fiancé and boyfriend of three years, kept in the background throughout and made humourless and bad tempered just in case we get any stupid ideas about caring for him, is callously despatched in the final reel, his final residency status unknown, the relationship apparently forgotten, while Lewis, the son that Butler abandoned for reasons unspecified, lest it test our loyalty to the leading man, is a one dimensional movie child with no tangible personality.

Butler makes us hate him all the more by giving him all-American nicknames, despite his character’s Scottish origins, like “kiddo”, “champ” and the like. He doesn’t correct his son when he insists on calling the game “soccer”, despite knowing better. Cultural sensitivity is one thing but, we’re forced to ask, did Gerard really leave the UK and a guaranteed pundit spot on Match of the Day for an automatous son and callous wife? Playing for Keeps asks difficult questions like these but provides no satisfying answers.

Certificate: 12A for the promise of gory images that turns out to be b-movie footage on a television set, anti-English sentiment and Uma Thurman.