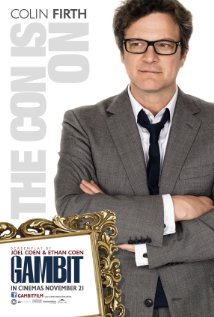 The only successful gambit in this woefully underwritten, ‘whoops, there goes my trousers’ affair, attributed to the Coen brothers, (though they may be one of the movie’s better jokes) occurs around the quarter hour mark. The machinations of Colin Firth, here risking much as he breaks from his colourful, wild man persona for the comfort curtailing badlands of stifling English reserve and Farquhar-like imperiousness, are played out in just a very few scenes and without a hitch… which is a shame as Hitchcock might have added some suspense and mordant humour.

Michael Hoffman, perhaps in his only conspicuous act of on screen manipulation, now cuts back to the moment of the scam’s inception; a nervous Firth (though it’s not always easy to tell) sitting in a Texan rodeo bar preparing to approach the cow girl he hopes will help him defraud £12m from his hated employer. It’s a nice wheeze: we now know how it’s all supposed to go down and are set up for what we imagine will be real world complications.

Tom Courtenay’s Major adds words for clarity: “Harry Deane’s weakness,” he tells us, “is that he sees the world as he’d like it to be.” The finished movie suggests a similar act of self-deception took place behind the scenes. It must have looked so very different on paper: a hilarious old school farce with dollops of synthetic British wit. The reality is something like Nothing On, the spoof sex comedy from Michael Frayn’s Noises Off, but there’s no metatextual dimension to this romp; nothing to compensate for audience embarrassment. Michael Caine’s version felt fresher and its 46 years old.

The Coens, in a bid to compensate for the double whammy of having next to no material and zero feel for the cadence and rhythm of English farce, employ the movie equivalent of diluting the millilitre of shampoo at the bottom of the bottle to make it last. We’re left incredulous at the brother’s attempts at stretching stick-thin situations over an inordinate amount of running time; more water than shampoo you feel, and how much easier it surely would have been to populate the screenplay with jokes and slapstick setups, rather than filling nigh on half an hour with Colin Firth walking around the Savoy sans pantaloons. Why, you ask, has the movie stopped and the middle half hour been replaced with a weak remake of Fawlty Towers, in which one comedic avenue after another is bricked up, leaving both Firth and his chicken legs dangerously exposed?

Perhaps Joel, Ethan and Michael thought that Colin’s inert persona would be enough: an amusing counterpoint to the movie’s half-cocked misunderstandings and pratfalls. Safer bets have been made at 4am in a Las Vegas casino. Instead all concerned would have been better studying Blake Edwards; a man who knew a thing or two about extracting comic mileage from an idiot caught in a hapless maelstrom. The trick, Edwards knew, was to play it straight, keep the energy up and litter the screenplay with numerous opportunities for your lead character to embarrass themselves, get injured, injure others and destroy property. Everyone in Gambit knows they’re in a comedy (relatively speaking) and they ham it up accordingly; there’s no invention in the setups and no pay off worth a sovereign. It’s mirthless, languid and obvious. Well, you can relate.