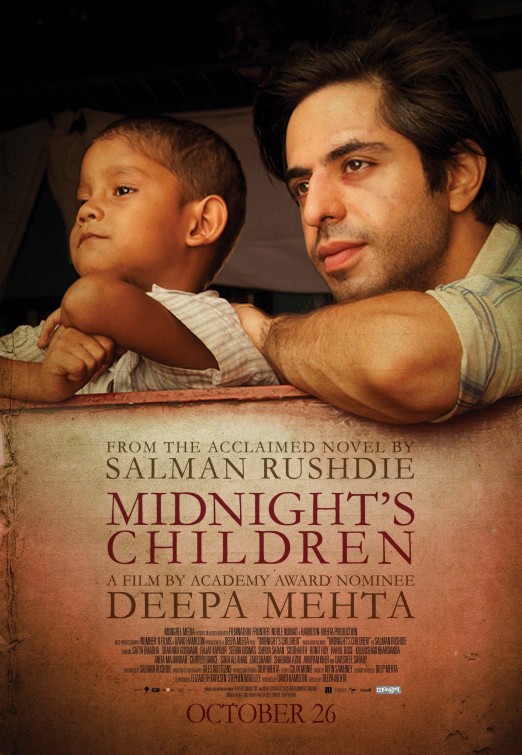 For some Salman Rushdie’s adaptation of his colonial novel, a magical realist tract narrated by no less a man than he, will be deemed worthy of a movie fatwa; the film fascists being aware that cinema is a collaborative medium and so harder to make in hiding.

It’s not quite as bad as that introduction implies, but it’s pretty daft; an impossibly contrived and whimsical confection that will appeal to the woolly minded, that is to say, the spiritual, but will find fewer friends amongst the constituency that suspect the Ganges to be full of effluent and cholera, rather than the healing powers of legend.

The key to its near total failure is that difficult, some might say hazardous journey from page to screen. Received wisdom, of the kind popular in faith based cultures, would have us believe that film is a crude instrument for extracting the mystical properties of the novel; the magic that’s interposed between those finely crafted sentences and the human mind. What film, they say, can hope to capture the depth, the weight, the sheer imaginative load of the novel? Cinema, after all, can only show us surfaces, allude to feeling; it’s incapable of accessing the consciousness of its characters as literature does; it can’t seamlessly merge that individual with an object, a people, a country, as Rushdie was said to have done in his memoir of India’s colonial afterlife.

Well my friends, you don’t come here to wallow in received wisdom, so instead let me suggest an alternative: that film acts like a magical spyglass – a lens through which all the lies of the written word are stripped back and exposed. In their stead, a story adapted for the screen, true to its literary origins, is shown naked; a narrative that’s either strong and therefore holds up under the intense gaze of the film spectator’s scrutiny, or collapses, unable to rely on authorial crutches like the rhetorical flourish and the exotic detail: the authentically recalled or well researched aside that impresses the book critic in their North London flat.

Midnight’s Children the movie, shorn of the twinkle and majesty of Rushdie’s prose, relies on his plot to bewitch the viewer. To the layman, the kind sensible enough to discount the booker prize as a badge of quality, said story sounds like a curious cross between X-Men and Jeffrey Archer’s Kane and Abel. The genius required to make that pairing work should be immediately apparent. It’s lacking here. The result is something like chocolate and whole grain mustard: the kind of movie you could only enjoy pregnant and hormonal.

As in the source novel, two babies, one the product of an imperial profiteer and his middle class wife, the other the son of an accordion player and a slum dweller – the governor’s former servants, are born just after midnight on the morning of Indian independence. No sooner has the feculence been washed from their faces (that’s a metaphor for the residue of British rule), they’re swapped by a naïve nurse, in what can only be described as a student act of political revolution.

Both boys grow up with each other’s lives but find that they’re telepathically linked, along with every other babe born in those first seditious minutes; a connection born of mystical energy, exclusive to the poor boy turned pampered, Saleem and generated by his bulbous nose. The others have different abilities – the power to make things invisible, the power to have no discernable personality and so on. It isn’t clear how magic and geopolitics interrelate, for example we never find out if children from other newly independent states can do similar things, but what is certain is that the boys represent the new India and Pakistan. Rushdie reminds us in frequent interventions: there’s a heavy handed scene in which a teacher illustrates the contours of the country using Saleem’s face, while Indira Gandhi goes insane and tries to have them all purged, as there’s only room for one symbol of national unity. No really, that happens. On paper a talented author can alchemise just about any conceit but film is less forgiving; on film it looks a lot like nonsense.

For a start there’s that problem of integrating the magic and the real. In the midst of social and political upheaval, the film’s few moments of heightened reality feel infantile and intrusive. The story pivots on the swap of both children but the motivation for doing it, as well as the moment itself, isn’t sufficiently foregrounded nor endowed with the kind of emotional and psychological heft required to make it work. Consequently it seems like an arbitrary and incomprehensible decision that undermines what follows. To use a pertinent assertion, you just can’t believe in it. Sure, this is a story based on India’s oral tradition in storytelling; a modern folk tale for its recent history; but rather more virtuosity behind the camera was required to induce the desired hypnotic effect. Deepa Mehta just isn’t up to it.

It’s not a total write off. Nitin Sawhney’s score is romantic and quite beautiful; a soundtrack that compliments the colourful photography and heightened emotional content. If you can tune out the crude symbolism and mumbo jumbo, there’s a sense of the country in transition; the inequities of the former colony perpetuated and deepened by division and violence. It’s remarkable that Rushdie should make that feel slight, like a fable rather than a shared history, yet somehow he manages it. You can call that unfortunate but you can’t say it’s magic.

Certificate: 12A for uneroticised breast, Charles Dance and nasal fixation.