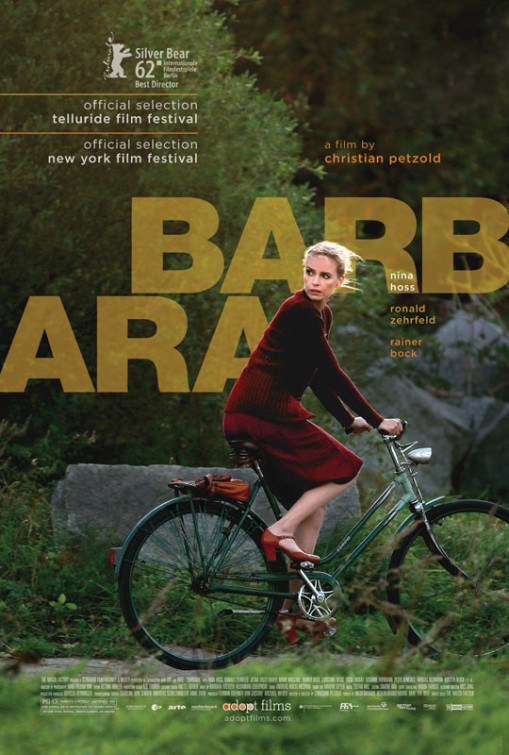 You won’t find much in the way of Ostalgie – nostalgia for the former East Germany, in Christian Petzold’s intimate drama. It remembers pastoral life in the GDR as still and empty; a land of pliable tension. As an anthropological excavation it’s sharp on tiny details, wanting in humanity, as though the solemnity and hard heart of the old society had bled into the dramaturgy. The resulting aesthetic conjures up reassuring associations for decadent western audience members as they waddle into cinemas, presumably fat on capitalism: it’s static, cold and somewhat muted. Little wonder perhaps, as we’re told this was a Soviet outcrop with constraints on all forms of expression – and low and behold, with the upmost reverence, here’s the artistic homage.

“You can’t be happy here” says Nina Hoss’ titular Doctor; a would-be escapee, and we’ve no reason to doubt her. She’s an extension of the film’s dull schema – inanimate, careful and quiet. Even when confronted by her Western lover, whom she hopes to join via an elaborate aquatic escape under cover of darkness, there’s little in the way of a spark, leaving one to wonder why her man would expend so much capital on the relationship. In fact there’s a suspicion here, as in a similar scene at a hotel, in which Barbara meets another girl, inseminated with hope and more besides by a Western business type who stokes her bourgeois dreams with promised items from a glossy catalogue, that the story’s built around moments designed to interrogate the condition of the society – a time capsule assembled from anecdote, with the human participants a utilitarian afterthought.

So reserved is Hoss, though confronted with numerous dramatic flashpoints – her dangerous affair, invasive treatment from the Stasi and a fellow clinician possibly “groomed” to spy on her, that investing in her plight means tapping deep into your reserves; this isn’t a tale to engage the emotions or trouble the spirit.

Understatement is a valued commodity you understand, but in reaching for verisimilitude, or whatever passes for it in the filmmaker’s imagination, Petzold has crafted a drama that’s fifty shades of Stalinist grey. Were it more animated, more affecting, there’s every chance that Barbara would make a fine bridge with the past. Instead we’re left to reflect on how modern Germany remembers its once estranged territory while feeling removed from the experiences evoked. For our lack of involvement we may as well be watching through a periscope from the other side of the Berlin Wall.