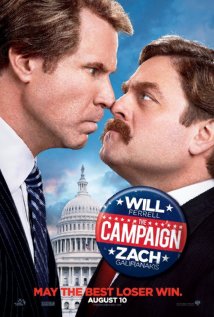 It’s an election year in the United States and that’s a call for the movies to step up and remind Americans how perfidious their politicians truly are, show the tail wagging the dog, then throw an arm around the audience’s shoulder and reassure it that the people’s values – that’s optimism, honesty and integrity, are still winners. That’s why those damn Yankees love the flick house: it sells their fantasies back to them for $8 and the price of a bucket of buttered popcorn.

The Campaign, a Will Ferrell vehicle as understated as a monster truck with twin afterburners, is political satire funnelled through the brain of an adolescent boy. It’s aggressive, deeply misogynist and a mirror for the full body dysmorphic. Ferrell’s fans know the score: subtlety isn’t welcome here.

Yet, beneath the homophobic undercurrent and the fingers pointed at the obese, there’s a serious critique of American political life: an entry level introduction to the spectre of special interests.

Dan Aykroyd (“I thought he was dead” said the girl in the row behind mine) is promoted from his Trading Places role as the victim of an unscrupulous couple of rich capitalist siblings, to one half of a new pair, the other being John Lithgow. The Motches are the new Dukes. That old John Landis joint may have been the spur for this story. “Interchangeable Places” is a better name for the movie’s structuring idea: that candidates for congress are commodities to be bought and, if necessary, exchanged mid-campaign, depending on their ability to sell the message.

Ferrell is a four term congressman plagued by Clinton-eque sex scandals in his deeply conservative Southern district. Consequently the Motches, looking for a lightning rod for their scheme to import Chinese labourers into local factories, turn their attention to Zach Galifianakis’ Marty Huggins, an earnest, camp, small dog owning, plump communitarian, whom they’re quick to repackage as Ferrell’s replacement.

A spin doctor is promptly appointed to turn Huggins from oddball ridiculant into, er, a professional politician. He’s suited, inseminated with macho bullshit and given a masterclass in dirty tricks while his naturally porcine family are made over for television. Soon he’s sounding more Ferrell than Ferrell, prompting an increasingly silly escalation of mud slinging between both camps. This, Jay Roach knows, is what Ferrell’s audience paid to see – a baby accidently smashed in the face, a drunk Will ramming a cop car into a cow and so on.

Meanwhile, Ferrell’s TV spots put the lack of ideology, of anything approaching a real choice at the heart of his campaign, in bold. A montage of publicity stills, showcasing his association with political grandees, includes both Bill Clinton and Arnold Schwarzenegger. Red or Blue, it’s all the same on Capitol Hill.

This being a teenager’s take on democratic infelicities, it’s perhaps inevitable that a morally righteous coda should close proceedings. Ferrell is reminded of his childhood disdain for injustice and ends up doing the right thing. Galifianakis thumbs his nose at the lobbyists and vows to speak up for the common man in Washington. Though the movie’s base currency is cynicism, with trade good throughout, Roach asks his audience to believe in the power of the individual to make a difference in that final reel. The American dream, dead for 80 minutes, suddenly bolts upright and takes a deep breath.

It’s a constituency friendly ending that points to the movie being beholden to a special interest of its own; the commercial imperative. It pokes the lie that voters tell themselves – that they care enough about their politics to change them. You think of Nashville with its closing assassination, the temporarily shaken crowd calmed by Barbara Harris’ rising chorus of “It don’t worry me”, and you realise it remains one of the few movies about the soul of American politics that tells the truth.

Certificate: 15 for cruelty to women, children and animals.