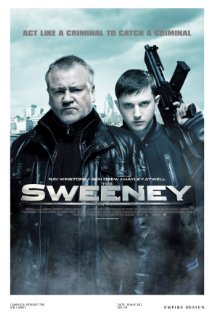 Alright? Here’s a review of the fuckin’ Sweeney. Not to be confused wiv the sweeney. Not the one that wuz on the telly back in the sevenease. Nah mate, this is a new film: the bollocks from Nick Luv. Ease the geezer that made all those footie flicks, ya know, The ‘ooligan factory and der fuckin’ bizniss. C’mon, don’t tell me y’didn’t see ‘em, don’t be a cunt.

You remember Regan and Cartarr, yeah? They were old bill, the “flying squad”. Took daawn a lot of the firm – ‘arry the bastard, rayzuz, Pete the Ponce and Camp Freddie. Back in the day thade get wind of a job, probably from a snout daawn the Mr Toad (Old Kent Road) and wud show up wiv a shooter in thair baby shit coloured Ford, and ‘ave the lot banged up. “’allo tinkerbell, you’re nicked!” That’s what Regan wud say. What a fuckin’ liberte. I’d cut that cunt. But fings weren’t der same back then. Men knew ‘ow to dress for a start – kipper tyes, fag stained jackets, proper clobber – you looked the bollocks. And birds? Fuckin’ ‘ell, the birds! If a copper didn’t shag at least ten a week he was branded a Mr ‘umphries, knowhattamean?

It was an ‘ard series, like the coppers, and people luved it. None of that “’ow do you do”, Dixon of dock fuckin’ green bollocks. Nah, this was a couple of blokes roughin’ up every snitch, nonce, ‘ardnut, tart and MUG, and sortin’ ‘em all awwt. Nick Luv fort that a modern crowd might like a bit of that, cos we’re all so fuckin’ liberal and borin’ nowadays int we?, so ease got a crew togethver, includin’ Ray Winstone, who looks like a fuckin’ bear that’s been shaved against its will, and Plan B, ‘ooze a black musician or somefing, and he’s remade it. It’s all shot fru a blu gauze, like the old tie-uls, makes it look proper cold, reflecting the emotional state of the two coppers. There’s ‘ardly any fuckin’ humour in it, but you ain’t got time for that when you’re trying to make a no nonsense feriller wiv a big pair of ‘airy nuts and lots of fuckin’ mawff.

Alright, it’s a bit ugly, no cunt wants to see Winstone climbing over ‘ayley Atwell, it looks like she’s being eaten by a fuckin’ gorilla, but improbably, him and Plan B make a decent pair. They’ve got the fuckin’ chat and someaahh they carve out distinct characters that may not look and sawwwnd much like the old ones but cud still be their fuckin’ relatifs. Luv likes a bit of cockney violence – blades, shooters and claret, and he doesn’t fuck abawt. Pity he can’t shoot action to save ‘is fuckin’ life, in fact sometimes you feel lucky that the cunt pointed the camera at the actors, but at least there IS action and its as raw as ‘er indoors corn beef ‘ash.

Course all the old stuff, the racism, the misogyny, that’s all gone nawwh, this is the 21st century, but one fing he ‘as kept on is the fuckin’ clichés. Damian Lewis, who just doesn’t need it, and Steven Mackintosh churn ‘em awt like they were in Life on fuckin’ Mars. Dawn from Eastenders is in it too but she does fuck all. A pity, I waz ‘oping to at least see her tits. You don’t get Atwell’s neever. You got Linda Bellingham’s, the oxo bird, back in the nine een seventy seven film but those were different times. Betta days.

Certificate: 15 for sexual contact between Ray Winstone and Hayley Atwell