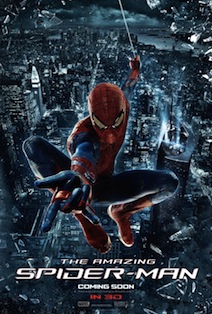 Before the fantasy, reality: studios revive iconic brands because it’s low risk and good business. Why take a punt on the unknown when you’ve got a sure thing? This Spider-Man reboot, as we’re loathed to call it, vomits up a different question; what responsibility do the custodians of these monster brands have to their freakishly loyal customers? Some? None? If we’re suckers for a new spin, pun intended, should they care that the product is redundant?

Every Spider-Man movie is worth a billion dollars to Sony. Why, under those circumstances, would they hand the house keys back to landlords, Marvel? The Amazing Spider-Man, in cinemas a mere 5 years after the last series fizzled out, exists only to satisfy a rights agreement. If you find that distasteful you should boycott the beast. You won’t of course. Fandom’s a drug. We hate the dealers and maybe we’re right to, but ultimately we’re the fools with our dicks flopped out, begging an executive from the parent corporation to jam a needle into the fat vein.

Creatively, it’s almost impossible to justify the film’s existence. If Sony held the rights in perpetuity Spidey would be resting and rightly so. Studios may be greedy but they understand that the key to keeping their golden geese healthy is to regulate their egg laying. Man of Steel, a new take on Superman’s origin, will premiere in 2013, 35 years after Richard Donner told the same story. That, most pundits would agree, is a healthy gap.