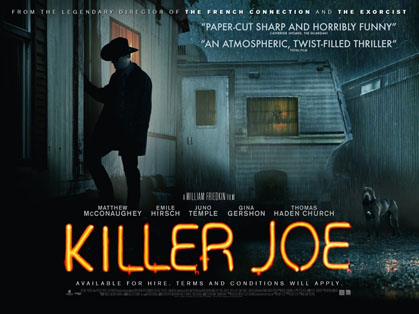 Joe himself, all studied menace and silent threat in the throttling hands of an imposing Matthew McConaughey, is the show’s most enlightened character, and he’s a violent sociopath with predatory proclivities. He dominates the rest, and swallows the movie, by being the only alpha in a caravan of broken belles and supine men. Once the heartless matriarch is dispatched, whose botched attempt at smothering daughter Dottie has, we suppose, deprived her young brain of essential oxygen, there’s nothing to stop Joe dominating the brood. What a wretched horde it is; rootless, guileless and brutalised by poverty.

Friedkin was always one to retract a sore foreskin; he’s been performing anatomical investigations on American society since the get go; and he’s still doing it in good humour. The addition of a simple prop – a crucifix – to the wall of the Smiths’ home, a hotbed of sex, violence and the imaginative use of fried chicken, says much about how Friedkin and Letts see their backward characters. The world of Killer Joe is one of deep hypocrisy, in which bread and butter institutions like religion and family, oft cited as the bedrock of Southern life, become black punchlines. Is it anthropology or snobbery? Maybe Friedkin will claim that it’s a burlesque – but as the British comedian Al Murray found out, when his bigoted pub landlord character began to look attractive to the very people it was satirising, it’s a fine line and the audience don’t always know which side they’re supposed to be on.