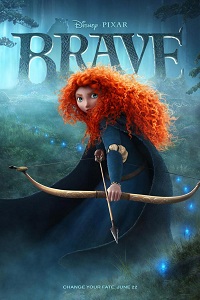 She Captures The Castle

At first glance, you might think the title of Pixar’s latest feature, Brave, stems from the company’s creative decisions – the animation house’s first female lead and its inaugural foray into the realm of the traditionally Disney-dominated fairytale. But, deeper, beneath the trappings of the genre, lies the true meaning of the title – a tale that deals with far more complex matters than the rescue of dozing damsels or the dangers of accepting fruit from your father’s new squeeze.

Set in an ancient Scotland that’s more Braveheart than Brigadoon – all crumbling castles, gnarled ancient woods and political disputes – Brave follows the feisty, flame-haired Merida (voiced by Kelly MacDonald), a princess who has just come of age for marriage.

Her parents, King Fergus (Billy Connolly) and Queen Elinor (Emma Thompson), plan to guarantee the allegiance of the surrounding clans, and the safety of the kingdom, by granting her hand to the man who distinguishes himself in a tournament held in her honour. Now, normally, a worthy, luxuriously-maned prince would toss a few cabers, skewer a few targets and sweep off with Merida’s heart.  Of course, this being Pixar, Merida is not your average princess and this isn’t your average fairytale.