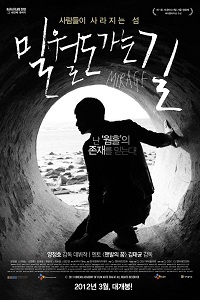 If there’s one undeniable fact of youth, it’s that children are cruel. And one unquestionable truth of adulthood is that the scars left from our early years never fully heal. A treatise on these notions, director Yang Jung-ho’s feature debut, Mirage, follows Dong-jo (Mun Jeong-ung) a young author returning to his hometown of Incheon for the first time in many years to receive literary award.

After leaving his wallet on the train that brings him to his childhood home, the now-penniless Dong-jo has no choice but to rely on figures from his past. As he travels around the dank streets of Incheon, one name keeps popping up in his conversations with his old friends: Ki-jung. It quickly becomes clear that Ki-jung was once an extremely important figure in Dong-jo’s life and played some part in the event that caused him to run from Incheon and his past.

Fittingly, given the protagonist’s profession, Mirage is the filmic equivalent of a cerebral page-turner. Jung-ho unravels his narrative piece-by-piece, never frustrating with a lack of revelation, but never quite revealing enough to allow the viewer to piece together the full story.

Similarly, jumping between timeframes, frequently shifting between past, present, and even into a stylised recreation of Dong-jo’s novel, Mirage’s structure reveals the details of the plot by degrees and inference.

But, it’s through these childhood flashbacks – the strongest segments of the film – that we see the intensely close bond shared by Dong-jo (Kim Chang-hwan), a rather taciturn but intensely loyal young man, and the friend he seems caught in the orbit of – the creative and emotional Ki-jung (Shin Jae-seung).

Unashamedly, undeniably different, Ki-jung is obsessed with photography, legends, arthouse cinema – the door to his den bears the same inscription as the entrance to the Zone in Stalker – and literature. Of course, as is the case during childhood, Ki-jung’s different tastes, and alluded-to sexuality, mark him out as a target for the school bullies and lead the pair careering towards a tragedy that will define their adult lives.

Featuring two incredible performances from the young leads, these segments hammer home the fact that what happens in childhood reverberates in adulthood, with Ki-jong’s cultural and creative influence and his friendship informing everything from Dung-jo’s choice of profession to the story of his novel itself. Similarly, the interplay between the two, and how their relationship changes and evolves when placed under various pressures – Dung-jo’s new girlfriend, the attentions of the aforementioned bullies, Ki-jong’s obsessive, unhinged quest for a supposedly-mythical wormhole – is enthralling.

But, there’s also a considerable mood of unease and tension that permeates the film, sustained by Jung-ho’s narrative techniques, the gradual blurring of reality and fiction, and a genuine chemistry between the two young leads. As the story’s threads gradually weave together – Dung-jo’s barely-fictional novel reflecting his guilt-ridden psyche, the horrifying truth behind his escape from Incheon becoming apparent – Mirage builds towards a brutal, haunting denouement.

Visually, Mirage, much like the thematic interplay of imagination and reality, or loyalty and cruelty, features juxtaposed imagery and colour schemes. Cinematographer Park Jae-in shoots the bleak Incheon streets in foreboding, oppressive greys and blues, the occasional burst of colour offered only by Ki-jung’s clothing – swatches of red and yellow amidst the gloom. The symbolism may be rather heavy-handed, but the visual effect is striking.

Similarly, as the lines between reality and imagination become blurred, Jae-in lenses some exceptionally beautiful images. From Ki-jung’s ‘Zone’ – a disused industrial complex transformed into an otherworldly haven by the soft light of bare lightbulbs, countless cryptic pictures snaking from strands of string and inky scribbling on its walls – to an uneasy torchlight lit trek through a forest of bare-limbed, grasping trees and unnatural shadows, Mirage’s cinematography is exceptionally evocative.

A heart-rending and visually striking reminder of the dichotomous cruelty and loyalty that exists in childhood, Mirage is a mesmerising debut from Jung-ho and a worthy addition to the growing pantheon of great South Korean cinema.