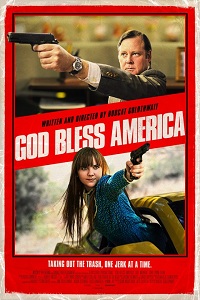 From then on, Frank devotes what remains of his life to a new purpose – to rid America of the most repellent members of its society, starting with Chloe. Along the way, Frank picks up a groupie in the form of Roxy (Tara Lynne Barr), and the two beat a murderous path across the US, killing the cruel, the rude, and the downright talentless.

Goldthwait, who also scripted the piece, offers up what essentially amounts to the darkest of wish fulfilments. Frank, a man at the end of both his tether and life, acts out the fantasies we’ve all had at some point – to take revenge on the rude, the cruel, the exploiters, the bullies and the bigoted. Or, as in one memorable scene, to make those who answer their phone in the cinema hang up. Permanently.

But, more than that, God Bless America is a vitriolic hate-letter against the alleged putrification of American culture and its lack of, what Frank terms, ‘kindness.’ Most notably utilising spoof adverts and news reports in the same manner as Robocop or Starship Troopers, Goldthwait makes his point by featuring a reality TV show whose ‘stars’ resort to throwing used tampons at each other, right-wing groups berating Alzheimer’s as the ‘disease of socialists,’ and a group of teens burning a homeless man alive while filming it. That these segments manage to be both ludicrous and, as they have clearly recognisable real life analogues, terrifying, only marks out just how effective they are. Society is sick and our culture is bankrupt, according to Frank, and, from the parallels drawn, you’d be inclined to agree.

If all this sounds like a bit of a self-righteous, left-wing fantasy, that’s because it is. But Goldthwait is a canny enough filmmaker to temper this liberal leaning with the effects of his leads’ actions. Instead of combating the media system, they unwillingly become part of it – offered fame and macabre glory for no more than pulling a trigger. This isn’t the answer, Goldthwait knows, and the fate of his leads hammers it home.

Still, cultural diagnosis aside, God Bless America does have some problems. When the thrill of seeing Frank’s etiquette avenger in action wears off, it becomes apparent just how little characterisation is afforded to the two leads. While the script is very well-written and frequently hilarious, Frank is little more than a mouthpiece and Roxy – all diminutive sass, strange interests and withering putdowns –  seems plucked straight from a Diablo Cody script– a fact even Frank acknowledges when he calls her ‘Juno,’ much to her chagrin. Disavowed sexual tension aside (We’re platonic spree killers?’ asks Roxy) the two arrive at God Bless America’s bloody but disappointing conclusion much the same as when they first appear on screen.

But, there’s more than enough biting social commentary and black humour here to cover for Roxy and Frank’s firework-esque character arcs and a weak finale. And, failing that, there’s the chance to see the clip Orange should actually use to persuade cinema-goers to turn off their mobiles. Trust me, you’d never hear another ringtone.