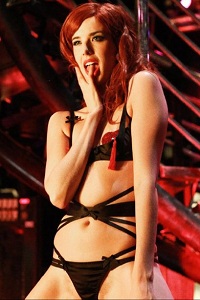 You know you’re in trouble when, a mere five minutes after the lights have dimmed, you can tell not just how a film will end, but what steps it will take in getting there. An English language remake of Drive director Nicolas Winding Refn’s feature debut, Luis Prieto’s Pusher follows Frank (Richard Coyle), a small time drug dealer who isn’t quite leading the glitzy lifestyle he feels he deserves. Instead of flash cars and swanky penthouses, Frank runs his meagre operation from the driver’s seat of a battered, speed-striped Ford Escort convertible and the living room of a dingy flat.

Accompanied by his best – and apparently only – friend Tony (Bronson Webb), he roams fair Lahndan Tahn slanging gear to all and sundry, drinking, fighting and generally being a stereotypical geezer. Until he’s tempted by a newly-released prison contact to pursue the ubiquitous One Big Deal with funds borrowed from alternately genial and psychotic Serbian drug lord Milo (Zlatko Buric, reprising his role from Refn’s original). Inevitably, the deal goes awry and Frank’s life plummets into a downward spiral of torture, betrayal, blood and bullets as he struggles to save his skin.

If that set-up sounds a little familiar, it’s not just because Prieto’s film is a remake. From the Guy Ritchie-esque opening titles – all freeze-frames, character names and mugging to camera – to the stylistic tricks themselves – do we really need camera shake to suggest a fragile mind? – a strong sense of déjà vu haunts Pusher.

Indeed, there’s shots in here that have quite literally been seen in a hundred other films. From a strobe-lit club brawl to Frank’s anguish in a bathroom mirror as he washes blood from his battered knuckles, there’s very little that catches either the imagination or the eye in Pusher.

Similarly, while watching Frank’s tiny empire – and his own psyche – implode offers a certain ‘just desserts’ thrill, that’s just not enough of an incentive for spending an hour in the dark. If you build a film around an antihero, they need to be intensely charismatic, occasionally understandable or simply unique. Frank is none of the above. As he flits from one disaster to the next, his actions merely continue to highlight what’s evident from the start of the film – that he is a horrible human being. That’s not to say Coyle is poor as the lead, just that the script allows him little chance to win the audience’s sympathies. As a result, Pusher, to its detriment, offers up a tale of schadenfreude rather than tragedy.

Worthy of note, however, is Agyness Deyn performance as Frank’s ‘girlfriend’ Flo. Where Frank’s character is firmly marked out, Flo is far more interesting. Where Frank revels in his dingy, drug-fuelled world, Flo seems trapped by it – stripping to make ends meet and hopelessly hooked on both Frank and the gear he peddles. Couple this tragic character arc with an intense vulnerability, considerable screen presence and some finely-acted emotional moments and it’s easy to see why a spin-off focussing on Deyn’s character has been mooted.

Still, one fine performance isn’t enough to raise Pusher from a standard cockney crime caper to something more memorable. As a result, Prieto’s film emerges as the worst kind of remake – one which neither improves on the original nor adds anything new to its genre. Pusher, rather ironically, leaves all boundaries unthreatened.