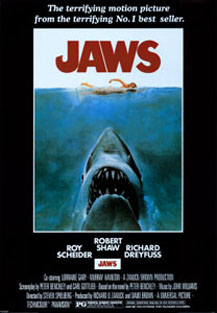 Thanks to Steven Spielberg these words are meaningless. Perhaps they were meaningless anyway but once, in those halcyon days, before blocks were busted, a film critic had a compact with their readers that meant something. They could be influential you see. A film’s release strategy didn’t just allow for this, it was part of the deal. A new movie would open on a small number of screens and expand gradually, subject to demand. Demand was driven by word of mouth and print buzz. If I liked a film I might talk it up, prod it, and the potential audience, being by and large mature, interested in criticism, perhaps even discerning, would take note and tell their friends, and maybe they’d go together and tell *their friends, and the studio, buoyed by a torrent of admissions, would book a few more screens, and the film would play for many months, having earned its place at your local film house.

Jaws changed all that. Modern movie truisms – that blockbusters are critic proof, therefore critiquing them is pointless, that scribes that can’t regress to inhabit the critical faculty of someone half their age are snobs – were born in the waters off Amity Island. Later, releases were frontloaded to achieve market saturation, to hoover up every dollar before patrons could compare notes. Simple, marketable concepts – so called high concepts, became the norm. Postage stamp pictures were born. Difficult, adult stories were fish food. By the time you read the reviews crafted by irrelevant old duffers with alien tastes, assuming you even bothered, you’d already seen the film three times. The generation of critics that followed, Spielberg’s bastards, courted relevance by only paying attention to these money spinners. Curiously they had nothing to say. None of this is Spielberg’s fault. He simply rolled the stone over. Who knew it was plugging a hole in the universe?

Universal were tossing a dime into a wishing well with their fin flick. Dropping it into the summer schedule, a necropolis, was an experiment; so too the simple campaign – an image of a giant shark swimming up to devour a naked swimmer; the concept distilled. The kids were alright but they weren’t in the habit of buying movie tickets. Innovative though the push was, if the film had been poor it would have remained thus. But Universal’s punt had two alchemic elements, Spielberg and John Williams. With their intuitive understanding of what made audiences tick, they were made for each other, and legions of sensation seeking pubescents were made for them. These puppets liked feeling the tug on their strings and the two maestros revelled in pulling them. This young audience shared Spielberg’s reductive mentality; a taste for pleasure unburdened by unnecessary ambiguities and story complications; they were happy for the filmmaker to do the thinking for them. The public were soon to get what they wanted, whereas once, before Chrissie Watkins went swimming, it was still possible to imagine it the other way round.

Still, it’s not Spielberg’s fault. No, really. He couldn’t have known that once Universal invited the kids in, they’d never leave; that monster success would infantilise film culture. The sophomore director made the best film he could under trying circumstances. The troubled production forced him to go with his gut and modify his technique. On a set where the shark didn’t work, the director had to, and it transpired he had the best instincts since Hitchcock. Watching Jaws in 2012 is no less exhilarating for being able to see the join. The framing of each shot, the use of space, the choice of angles, that contra-zoom, the intimate and sometimes unbearable close ups – Mrs Kitner confronting Brody after the death of her son, Quint’s Indianapolis monologue –all speak to a young filmmaker in full control of both his actors and the cinematic apparatus; a director who, at just 27, can do everything – characterisation, composition, suspense, horror, jokes and pathos – and all this, as befits a man specialising in illusion, without appearing to break a sweat.

Then there’s John Williams, also hitting his stride. Prior to Jaws, Williams had been a solid, if unexceptional composer. With Spielberg he found another gear. Perhaps modest expectations for the film emboldened him. He realised if that Spielberg was channelling Hitchcock, nothing less than Bernard Herrmann would do. It’s difficult to overstate how integral Williams’ score is to the film’s success. The two notes that herald the shark chill the blood but that’s just the overture. You think of the pensive accompaniment to Brody thumbing through a book on sharks, the tender cue that lifts the young son aping his father’s movements at the dinner table, the mournful trumpet as a grieving Mrs Kitner leaves a shamed Brody standing on the dock. But Williams is also restrained, as Spielberg is restrained, knowing when to show his hand and when to hold back. You think of the excess that followed in Jaws’ wake and realise how well judged that first blockbuster is.

If audiences jumped the shark following their inaugural summer thrill ride, craving Spielbergian excitement with a dash of Williams-esque whimsy over the New Hollywood flicks that were making the ’70s the best ever vintage for American Film, then so did the filmmakers. For both there’s an irony. Jaws may have been a high concept thriller but the story is character focused and intimate. The ’40’s movies studied by its director at Cal State inform its architecture. Brody, Hooper and Quint have the smell of real human beings. They taste great. If the shark matters at all, it’s only because it threatens people we’d care to save. The audience that Jaws defined, re-produced during many a drunken fumble throughout the ’90s, continued to be hooked using the same marketing techniques; conditioning so potent and all-consuming that the depreciating value of the product became an irrelevance – just lay on a bigger shark. No alternative was sought. Increasingly, no alternative was made.

Meanwhile the filmmakers, who hoped to replicate the thrills without the skill to embed them within a meaningful narrative, failed to learn from Spielberg, imagining that if it looked easy, it was. Not for them the study of classic technique. Driven by the profit motive, rather than the wunderkind’s love of movies, they escalated the spectacle and the sensory hit at the expense of those elements that had made that first smash so durable. That shark swallowed artistry whole, and those original cultural tourists, the ones wanting to think, to be challenged, haven’t returned yet. And why would they? There’s nothing for them to watch. It’s not Spielberg’s fault. He just made a movie. How could he know? He couldn’t have known. None of us could have known.

Thanks for reading. It was gloriously old fashioned of you.

Jaws is currently on limited re-release, digitally restored and showing in 4K resolution (no less).