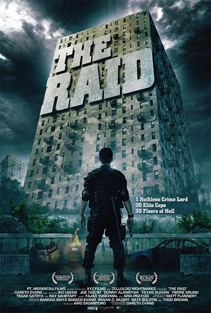 If there’s such a thing as a Pan-Asian cinema, which for the purposes of this review we’ll suppose there is, its most successful export is violence. Be honest now, you’re not interested in the plight of a Kuala Lumpur shopkeeper trying to keep his business afloat, or a burgeoning romance between two South Korean teens in a Ganwon village; no, Western audiences, accustomed to the kind of stylised, brutal murder exported from Hong Kong in the glory days before the colony was handed over to a totalitarian beast, want a bleak criminal enterprise with martial artistry unbound. Western cinema is so timid by comparison; we temper the violence. The United States cuts judiciously, lest it upset its supine populous. No, it’s off the leash elsewhere; brutality without walls.

The Raid has walls of course; enough to compartmentalise fifteen storeys of balletic bloodletting. Each level of cop on drug lord action, on floor after floor of a fortified Jakartan tenement, is informed by Pencak Silat, Indonesian Zumba with added contact, in which blades become an extension of a weaponised human body. It’s impressive; though you suspect more in the moment than on the eye, a suspicion reinforced by Welshman Gareth Evans who can neither position nor move his camera with anything like the same intensity. You’ll be damned if you can see how the spiritual dimension that allegedly underpins this code of combat plays any part in the movie’s nihilistic manifesto, but much is lost in translation on the long journey from the tribal village to the big screen.

Evans is acutely aware that the only interest his target audience have in humanity is seeing it destroyed, but it’s nevertheless a character flaw of this genre that it’s almost impossible to invest anything, bar the most superficial concern, for the blanks that constitute the film’s protagonists. Ostensibly there’s a backstory; Iko Uwais, buoyed by his wife’s pregnancy, wants to unite his black sheep brother with his family and he’s prepared to fight his way through a criminal compound to do it, but this is a little like a cutaway in a computer game; it’s the thinnest of lines upon which to hang a series of fights.