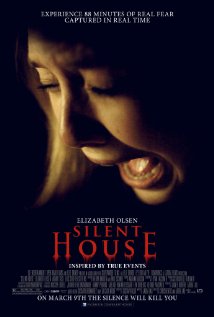 The trouble with a movie built on a gimmick is that inevitably form smothers content. It’s like a dull tract written with calligraphic finesse. The filmmakers hope that you’ll be so enamoured with their stylistic flourish, that you’ll be fooled into thinking you’ve enjoyed a story crafted with equal care.

This gap between technological fetishism and story craft now has a name: Olsen’s Cleavage. It’s been so christened in tribute to the literal gap between Elizabeth Olsen’s breasts, that dominates two thirds of Silent House. Like its parent picture, the Spanish La Casa Muda, the film employs a real time conceit, but with little happening and nothing to concentrate on but those pert hemispheres, it’s fitting that they should now be forever associated with the vacuum left by this approach.

If “real terror in real time” is the boast, what’s the reality? It’s a movie in which style strangles storytelling possibilities. Stuck in a house with what appears to be a TARDIS sized interior, and with the lecherous camera never more than a few feet from Olsen, directors Kentis and Lau paint themselves into a corner, unable to utilise the many glorious devices filmmakers have invented over the last century to spin a many fibred yarn.

Constructing characters is difficult when they’re only present for a few minutes or, in Olsen’s case, present throughout but limited to looking frightened and hiding under furniture. You can’t hold a look, you can’t cut away to suggest a relationship between an object and a character, you’re bound by a linear straightjacket and building tension is tough, because your movie’s architecture is modelled on a survival horror game like Silent Hill, in which a single character explores an environment, picks up objects, and makes the odd unpleasant discovery. Given these handicaps, it’s little wonder that Kentis and Lau are so dependant on those mammary glands to sustain audience interest. After this and Martha Marcy May Marlene there’s a real danger that they may get their own credit in future.

No terror then, so what of real time? When Hitchcock made Rope, the amount of film he could shoot in one take forced him to cheat. Today it’s possible, with choreographic chutzpah and a digital camera, to shoot a ninety-minute movie in one go, but Kentis and Lau, perhaps outwitted by their labyrinthine set, opt for invisible cuts. The problem is those aforementioned breasts. If you’re going to focus on them, as I’m doing, then you best not soil them with blood splatter. If you do, and the pattern of those crimson smears periodically changes, attentive audience members, who’ve got nothing else to focus on, may start noticing and realise that they’ve been the unwitting victims of a changeover during one of many scenes in which the camera spasms, drops to the floor, passes behind a wall, or loses focus as it struggles to keep up with the mugging, blubbing Olsen.

The film’s denouncement is further evidence that the logistics of “real time” were being worked out while Lau’s screenplay was still a few notes scribbled on the backs of bus tickets. In the dying minutes we learn that Olsen’s ordeal is the quasi-hallucinogenic manifestation of a repressed childhood memory; a rather nasty one involving her Dad, Uncle and that creepy dilapidated house. But hang on, you cry; didn’t we witness scenes earlier on, in which the audience was baited in a traditional way – a figure appearing in soft focus behind an oblivious Olsen, ready to strike? What exactly were we seeing there? If we only glimpse these ghostly figures when Olsen imagines them, why would she be unaware of their presence? It’s a cliché from traditional horror fare that doesn’t work in this context. Blowback from an approach to making a movie that maps out style, then sketches in the rest, almost as an afterthought. Just imagine if they’d tried it the other way round.

Certificate: 15 for excess cleavage and creaking.