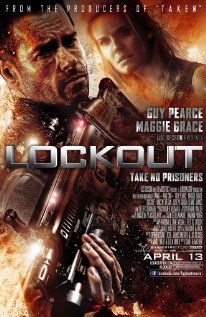 Question: What do you get if you feed Guy Pearce, outer space and Escape from New York’s script into B.A.N.G: The B-Movie Action Narrative Generator (the screenplay software that’s been the silent writing partner behind Hollywood hits for years)? Answer: Lockout. No, I don’t get it either. Fans of Luc Besson, forever in mourning for his childhood, whose movies are thrown up in tribute, will enjoy this generational throwback; the rest of you had better make plans.

If Besson’s Le cinquième élément brought to life his teenage dream, without adult refinement, then Lockout, borne of his brain and produced by he, is an unashamedly reverential regurgitation of a thousand and one 80’s genre movies, complete with don’t-give-a-fuck quip spewing protagonist, feisty damsel in distress, testosteronic mayhem and an orbiting space prison shot at Belgrade’s generic science fiction movie space facility world. That’s not a criticism; if man ever ascends to the stars and makes a go of colonising space, the dream that every child of Star Wars shared, then they’ll be crushing disappointment if our bases don’t have hexagonal corridors lined with extraneous tubing, keypads, yellow siren lights and automatic doors that hiss shut to reveal a stencilled serial number in a futuristic font.

If you know Snake Plissken isn’t a cocktail, you’re already familiar with the plot; what surprises is how much guilty pleasure directors Mather and St.Leger, who sound like islands off the coast of France, rather than filmmakers, wring from Lockout’s 95 minutes.

Guy Pearce, hulked on protein shakes, is instantly likeable as the reluctant action man who opens the movie with lines like, “his name was fuck you. He was Asian.” Ten relentless minutes later, and with not a frame wasted in setting up the president’s daughter as space-hostage premise, Pearce is heading to orbiting prison M.S: One (we know because this is the kind of movie that tells you where you are every few minutes in case the audience can’t follow the transitions between locations), on a rescue mission. Does he want to go? “I’d rather castrate myself using blunt rocks” is the reply that proves B.A.N.G’s John Carpenter plug-in is the best on the market.

Once looping the Earth, the movie loses its mind and you had better follow suit, else you’ll wrestle with questions like, why would prisoners, when faced with space-bombs marked “voice sensor”, speak, effectively committing suicide, or how does a space suit protect you from the Earth’s atmosphere, when you skydive from low orbit (only to be met by clairvoyant police on the ground who instantly arrest you)? Damned if you know? You would be.

In its one nod to realism, the prison’s murderers and rapists are spearheaded by a couple of Scots, so we can be in no doubt as to how degenerate and violent they are, but the rest is gleeful schlock. It hardly matters that the bulk of Lockout is bookended by what feels like a completely different movie; it doesn’t even consider the possibility of taking itself too seriously, so why worry? There’s even a ticking bomb climax for God’s sake. The 12 year old Luc would be proud.