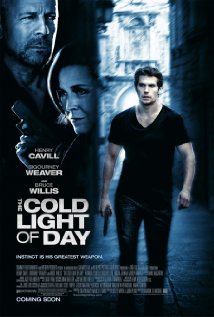 Warning: This review reveals some details of the film’s plot

I’m at a loss to understand why any American travels to Europe at all. It’s such a foreboding place, full of language barriers, murder, missing relatives… From The Vanishing to Frantic to Unknown, it’s long been shown that if you want to lose something; your wife, your identity, your job; the Euro Zone is the place to do it.

The Cold Light of Day forces our attention on Spain and an imperilled traveller in the hulking form of Henry Cavill. He doesn’t exactly show up with a copy of Lonely Planet stowed under his arm, nor does he stop to ask everyone if they speak English, the usual red flag to Euro gangsters, but then he doesn’t have to; his American fam are already there: Brooding Bruce Willis, a younger, weedier, spectacled brother who’s obviously not going to be involved in the action to come and two ornamental women; a wife who looks motherly, later vulnerable and brother’s girlfriend, who gets a character building bikini sunbathing scene on the deck of the family boat.

When Bikini Girlfriend has an accident, thanks to an errant wave and a loose mast, Cavill, being the only family member with the requisite muscle mass required to swim ashore, is promptly dispatched to buy painkillers. When he returns both boat and fam are gone, and so begins a faintly Hitchcockian hunt for the missing brood, in which pensive Paterfamilias Willis returns for just long enough to establish his identity as a CIA agent and the Maguffin’s as a briefcase that everyone will kill for. Job done, he’s murdered, leaving the inexperienced (but psychically well prepared) son to dodge the bullets.

That Cavill doesn’t know anymore than we do works to Day‘s advantage because this makes its ramshackle, sometimes chaotic construction an extension of the leading man’s blindsided understanding of events. Director Mechri doesn’t think we should be any clearer about the line of incident than Cavill. Consequently his zealous editor judiciously subdivides each slice of action.

If there’s an awkward disconnect between some performances and the emotional register of early scenes (formative exchanges between Cavill and Willis look as though their lines have been dubbed onto footage from a different movie) it’s not the end of the world; …Day soon settles down, becoming an occasionally involving, always brusque chase movie that doubles as a whirlwind tour of Madrid.

Minor visual flourishes from Mechri aside, this is mostly routine stuff, (though Cavill’s feminoid is reassuringly not a lover plucked in extremis but something more interesting) begging the question, why did the likes of Willis and Sigourney Weaver sign up? A free holiday in Spain is a tempting answer; this alone, surely, explains the blink-and-you’ve-already-missed-it performance from Colm Meaney as the government agent with two lines. Of course 38 seconds with Meaney is a thing of beauty, and he certainly gilds those fleeting pronouncements (it’s all in the intonation) but was it really worth the great man’s time? I could have played that part.

Certificate: 12A for sustained Henry Cavill and strong Bruce Willis.