Film Review: The Pirates! In an Adventure with Scientists! 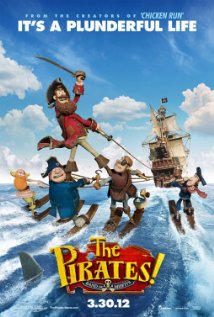 Ham, sophistry and the lash

With a name like Gideon Defoe, it was perhaps inevitable that said author would produce a mannered, mildly ridiculous, upper-middle class adventure with a nautical theme; not nominative determinism exactly, he’d need to be Gently Witty Pirate-Storyteller for that, but it nevertheless smacks of a conversation that began, “you know Gideon, with a name like yours…”

It was just as likely that Defoe’s ideas-rich story, concerning a crew of hapless buccaneers, their priceless dodo and a wicked Regina, would end up with Aardman studios. Fans of their Wallace and Gromit will know the care that Nick Park and director Peter Lord place in the creation of their characters, the visual schema and their scripts; employing an old English brand of gentle, homespun eccentricity.

Pirates’ humour will already be well known to fans of Oxbridge review chortle troupes like Monty Python; it might be labelled “British reserve”; jokes that rely on awkward protagonists and rogue adjectives, so you get plenty of sentences that begin with something being ever so slightly like this, or that, which is a mite less than the other, if you follow dear boy. If you don’t find that kind of public school reticence funny, or don’t enjoy the verbosity, there’s plenty of placating alternatives; excellent sight gags, like a wonderful moment in which a pirate makes his entrance from a whale’s mouth, and Aardman’s penchant for stuffing the frame with puns, and other finely moulded treats for attentive viewers. More than can be taken in with one sitting then, and a reminder that these Claymation worlds live, thanks to the handmade touch, in a way that their fully computer generated counterparts do not.

There are niggles. In a story this fishy, no one’s going to bat an eyelid at Queen Victoria’s premature portliness (though the podge is explained), or a cameo from John Merrick, some thirty years before his grotesque birth, but British audiences might wonder why this band of home grown eccentrics occasionally vomit up Americanisms like “getting to second base with a girl”. The answer, yes you knew it already, was that the film has transatlantic backers, and it wouldn’t do to have The Pirate Captain use home grown idioms alone; what if American children didn’t know what he was talking about? They don’t have the phrase, “polishing the globes” over there, after all. If that provides the occasional jolt, so does tepidly risqué stuff like jokes about leering at cleavage. One for the bigger boys in the audience of course, but such tonal farts sully the movie’s otherwise jaunty, child-friendly world.

That these are the only regrets in an hour and a half stocked with gleeful anachronisms and polite wit, is testament to the eminently rewatchable film the Lord has made. Pirates and Scientists alike should enjoy it, even if the young Darwin is reincarnated as a humourless, prestige seeking weasel. Remember, he wasn’t really like that, kids. He was probably a hell of a lot worse.