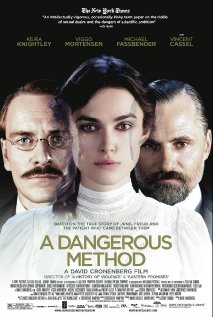 Any self-respecting film scholar will argue that a biographical take on the two fathers of Psychoanalysis, hated Fathers from an infant’s perspective (if Freud was right), is long overdue. The field and the medium were made for each other.

Lacan will tell you that cinema’s all about closely identifying with the subjects on screen – you’re sutured into the narrative (did it have to be a clinical metaphor for something so enjoyable, Jacques?), whereas for Mulvey, men allay their fear of castration, which I can assure you is very real, by controlling women in front of the camera. We objectify them and/or punish them, says Laura. Well, anyone watching Fassbender’s Jung smash the backside of Keira Knightley’s hysteric in David Cronenberg’s film, her nipples exposed, isn’t going to argue with that; how unfortunate then, that after decades of being exposed to a medium that is thought by some to act as a prism through which the psychical processes Freud and Jung talked about are refracted, a movie that actually deals with the early days of the discipline is so…uninvolving.

The dangerous method to which the title refers is the talking cure: the idea that whatever’s troubling you is rooted in your subconscious and by discussing it, in detail and at interminable length, you’ll inadvertently reveal where you’re broken. Cronenberg has a dangerous method of his own, however; to re-enact the disagreements between the two analysts while repressing all the drama. In one scene, Freud turns to Jung and says, “do you realise we’ve been talking for 13 hours?”. He may  not but I did.

So how does Cronenberg contrive to make this a holiday for the conscious mind? By structuring what is on paper, the fraught conflict between Jung and Freud, and Jung and his patient, later mistress and psychoanalyst in her own right, Sabina Spielrein, as a series of dry exchanges, sans punctuation, in which only Spielrein’s emotional register tips the audience to the seriousness of the relationship depicted. You have to take the movie’s word that Jung and Freud are estranged, as any sense of escalating conflict is nebulous at best; we’re told not shown.