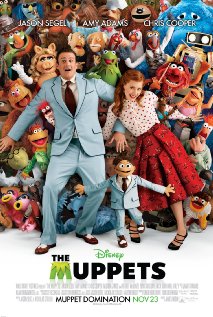 When there was first talk of getting things started on a muppet-ational revival of Jim Henson’s troupe of felt vaudevillians, competing with super-fan Jason Segel for the right to write was Miss Piggy herself, Frank Oz. In the event, franchise owners Disney, whose sticky fingerprints are all over the finished product, chose the newbie. Oz, who you might think is somewhat integral to any Muppet outing, responded with a visit to a vineyard and the plucking of sour grapes. “I didn’t like the script” he said of Segel’s approved blueprint, and so neglected to participate.

That Disney went with Segel, the 32 year old Judd Apatow acolyte, suggests they were after a treatment that had the ear of the childhood Muppeteers that would, they hoped, bring their freshly sired tadpoles into cinemas and make brand loyalists of them. At first glance Oz’s criticism of Segel’s script seems mean-spirited; The Muppets is a monstrously wholesome comedy; the kind where the heroes are dewy eyed, indecently decent and inseminated with gooey innocence, complementing our collective memory of Piggy’s pride. It’s gently wry, often sweet and yet, and yet…

Whereas no-one who’s seen Oz’s work in the last 20 years would hire him as a script doctor; this, after all, is the same Frank Oz who didn’t object to Yoda’s treatment in the Star Wars prequels and who liked the homophobic script to In & Out enough to direct it (and to think he doesn’t even have John Landis’ excuse that he killed three people to explain the loss of mojo!), it’s possible that the old hand was on to something when voicing displeasure at Segel’s treatment of the characters he and Henson created.

Behind the movie’s felt veneer, there’s plastic; saccharine polish supplied by Disney Pixar’s committee approach to movie making. Henson’s Muppets had a nice line in dry wit. They were anarchic. Segel’s are corporate stooges. Kermit’s gang now sell product for the parent corporation. Their theatre sits next to the Disney Store on Hollywood Boulevard and no aerial swoop of the area can miss the Cars 2 billboard that reminds Gonzo’s new friends that said Blu-ray is now in stores. The script, which like most movies fed into Pixar’s demographolizer®, has its fair share of good clean lines, comes sanitised, lest it taint the brand.

The irony is that Segel’s plot pivots on the Muppet name being co-opted by an unscrupulous capitalist. Henson’s Muppets might have had the balls to make him a media executive; instead in a neat example of bait and switch, he’s, er, an oil salesman. Still, there can be little doubt that Bob Iger, Disney’s chief, is the real Tex Richman; a man hoping to drill into an as yet untapped resource: your kids.

The Muppets have been successfully transplanted to the 21st century alright; it’s just a shame that while pretending to eschew the corporate mentality that informs modern family films, they’ve brought it with them. It’s impossible to dislike Kermit’s coven; even their bygone post-modern asides cause the ends of your vaginal simulacrum to turn upwards, but there’s no getting around it; it’s underhanded stuff. It won’t do.

Certificate: U for ugly product placement and corporate hypocrisy.