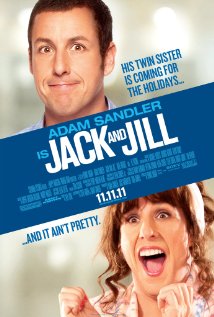 To fetch a pail of DASANI®

Anyone who’s serious about sitting through this execrable Adam Sandler money printing wheeze, should first watch Mike Stoklasa and Jay Bauman’s autopsy; a one hour episode of their Half in the Bag web series, that left the rest of us with little to do but regurgitate the main points. Chief amongst them, the observation that this is a film in name only, or, to put it another way, a film that exists not to tell a story or entertain an audience, but to facilitate a huge payday for Sandler and his retinue of SNL also-rans; a film that doubles as an $80m commercial for Sony, her subsidiary companies and related products. These include Coca-Cola, laptops and CBS television shows. Other companies that contributed to the pot, but are not wholly or part-owned by Sony, include the US chain Dunkin’ Donuts (a brand that consumes a third of the plot) and terrorists’ favourite American Airlines.

The premise, conceived as the golden thread that would link these paid messages together, involves an advertising executive chasing an Al Pacino endorsement for his donut client. The complication, the only complication, is that Pacino (playing himself without due regard for his diminishing reputation), wants to possess Sandler’s twin sister but she’s not interested, thereby jeopardising the ad man’s prospects. We’re invited to conclude that this was the conceit chosen because it allowed Sandler to do the least amount of work. The film’s humour is derived from his heritage schick – the stuff he can do in his sleep – a routine that Woody Allen might have called “Jewish with a vengeance”. It’s a turgid cocktail of identity politics, misogyny and casual racism. Easy laughs to mine, so the thinking went, but those chortles come at a price; this is the worst representation of Jews on screen since Jud Süß.

The early and unwelcome appearance of fellow SNL alumnus Dana Carvey, reminds us that the odious use of product placement is something that generation of contributors embraced wholeheartedly. Audience members with long memories will remember a sketch in Wayne’s World, in which corporate stooges Carvey and Mike Myers, pretended to send up intrusive advertising, while simultaneously giving Pepsi and Pizza Hut cameos. Myers ran with the ball and stuffed his second Austin Powers with similar endorsements, again insulting the audience’s intelligence by making the companies that had paid his enormous salary a part of the story (Dr Evil hauled up at Starbucks HQ, ho ho). We laughed, we had a Starbucks latte, we hurled.

Myers got away with it because he met the audience’s not unreasonable expectation that the film should contain jokes (many reused from the first film), thereby using a form of bait and switch that drew lingering attention from the distended commercial break on screen. It’s harder for Sandler to pull off, perhaps because he’s consciously and conspicuously disinterested in making Jack and Jill succeed as a comedy. The jokes are crude and obvious, the cynicism is breath taking, the disrespect for the audience obscene. Still, with the production budget clawed back and the endorsements branded into pliable brains, there’s little incentive for Sandler, or anyone else in his address book, to sit down and think about making a real movie any time soon. They say you should save your ire for the game, not the player, but Jack and Jill’s success is a testament to the fallibility of both.

Certificate: PG - potential parental guidance: some scenes may deter you from having twins of your own.