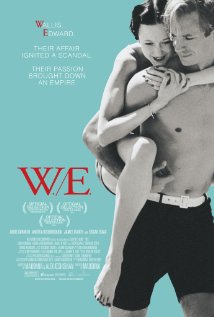 Be careful what you wish for, goes the new old saying, because putting it on the record may make you look like a dunce. Madonna, or Lady Gaga to her friends, told the Wikipedia source that made it up, that she hoped W.E., her pseudo-biopic of Wallis Simpson, would invest her with artistic credibility. Anyone who’s seen Shanghai Surprise or Body of Evidence will know that this is akin to asking for the recall of an Intercontinental Ballistic Missile in the moments following detonation. Yet she persisted and the result is 2012’s first bona fide film crime.

Fans of Simpson, who’ve waited 78 years for her cinematic rehabilitation, will have to re-box their swastika bunting. The rest of us should consider using a length to hang ourselves.

If someone had cut together scenes from a fan made remake of The King’s Speech with an episode of Melrose Place and added the time twin thread from the 1986 version of Biggles, this would be the stillborn result. W.E., that’s Wallis/Edward not Whatever, splices palace soap opera with Mills and Boon romance resulting in a credibility gap that the obese Edward VII’s backside couldn’t fill. In short, it is to royal biography what those commemorative plates are to royal weddings.

In fairness, Madonna takes risks: catalogue models instead of actors, casting people that don’t resemble their historical counterparts and changing history itself. George III died in 1936? Why no movie about our sole (to date) 198 year old monarch? So many kings named George, so little time to check facts.

It’s alleged Ms Ciccone took filmmaking lessons from a hideous Brundlefly-type hybrid of Sean Penn and Guy Ritchie. Neither man is in evidence here, so can’t be indicted, though there is a clash of styles. The Riefenstahl of our age experiments with awkward overhead shots, jarring close ups of moving lips and grainy faces in extreme close up. Although experimentation is welcome, there’s the feeling that these decisions could and should have been made ahead of time, instead of what looks to have been a cavalier session in the editing suite.

However the one time pop princess has brought her unique insight to the material. The treatment boasts a vapidity that would have made Barbara Cartland proud. Her characters converse in melodramatic clichés, inanimate as dolls and afflicted with autism, while her shot choices and edits invest the narrative with all the artistic heft of a perfume commercial.

Abbie Cornish’s unfortunately named Wally Winthrop, a framing device with breasts, is a borderline schizophrenic with an unhealthy Wallis obsession. Madonna wants us to believe her narrow interest stems from being named after the adulterous siren. This is darn right odd. My name’s Edward but I don’t take life guidance from an imagined incarnation of Edward VIII. Those Nazi themed parties were my own idea. Yet if you don’t believe that Cornish and the American violet are spiritually tethered, the modern portion becomes intrusive. Just what is it with biopics and framing devices of late? We can only hope that Spielberg’s Lincoln, due in December, isn’t narrated by a boil on the president’s dick.

Madonna might have thought that by using The Cameron Gambittm, that’s the use of a present day character to connect us to those that existed in the past because how on God’s green sphere could we relate to history otherwise, she’d invest Cornish’s character with depth and add pathos to the tragedy of two wealthy and self-indulgent socialites forced to live abroad in comfort at the taxpayers’ expense, but this is asking too much.

It’s nice they were in love of course, and Madonna’s right to try and humanise Simpson, after all she’s still an establishment bête noir all these years on, but try as Andrea Riseborough might, struggling to overcome the material girl’s unhelpful direction, we’re left with little impression of the woman beyond pearls, running mascara and neat handwriting.

If you want a proper look under the hood, an insight into how Wallis and Windsor functioned, you won’t get it from W.E.. Madonna understands where they went, what they wore and why it was happening but beyond this wikipedian account, there is nought. Ultimately the only person we get a sense of is Madonna, and even there the new information feels familar. She is, apparently, preoccupied by breasts, hedonism, clothes, fucking and material possessions. I know, who knew, right?