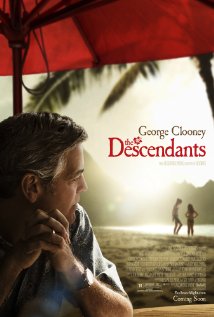 There are no dull Alexander Payne movies and the great news, following 2004’s Sideways, one of the best films of the last decade, is that there still aren’t. Payne’s eye for life’s idiosyncrasies is sharp; he sees the kook and pathos in an environment like a wide angle lens registers all the detail within the frame; his movies are life in deep focus.

His 1999 political satire Election, made a bear pit of high school politics; it was styled on the unpredictable, the tangential; it was funny and quietly profound. Payne repeated the trick with Sideways; a sweet road movie with notes of mordant humour that came at the familiar voyage of discovery, as promised in that title, from another angle; an unfamiliar world of vine yards, wine tasting and niche obsession. Territory (and terroir in that instance) that we thought we knew became fresh and life affirming.

With The Descendants, Payne has once again found an eccentric realm for us to explore, though with less caustic wit, presenting a Hawaii set tale of another off-kilter character, like Jim McAllister, like Miles, whose ordered life and assumptions are upended by circumstance. Our preconceptions about Hawaii as a paradise are arrested in George Clooney’s opening narration; his wife, glimpsed enjoying the adrenaline rush from water skiing behind a power boat, lies in a coma, the victim of an accident that followed soon afterwards. People from the islands experience tragedy, work stress and strife like everyone else, we’re told, and we’re about to experience it. Matt King, Clooney’s sole trustee to an inherited family plot of unspoilt land with a Pacific aspect, is engaged, on behalf of his enormous brood, in selling it to developers, while his daughters, hitherto the domain of the mother, are now his sole responsibility.

As we’d expect from Payne there are further complications; revelations about his relationship, familial strife, self-discovery; this is the currency of his movies and it’s as honest and involving here as it’s ever been. Thematically it’s as tight as a drum. Legacies, both literal and figurative, drive the story; King’s family links to the land and its character serve as the backdrop to a more immediate inheritance, that of his wayward daughters and the remnants of a strained marriage. It’s all carried off with a sweet comic sensibility, in place of joke porn, exemplified in Clooney’s curious run, or an earnest bedside visit that drifts into acrimony, and it’s this aspect, humour drawn from character and situation, rather than a script in hoc to one liners and contrivance, that gives the film its heart and head.

Sideways was a nigh on perfect movie; black humour married with great characters, so comparisons are unfair but here’s one anyway, The Descendants doesn’t hit those heights. However, it’s a welcome return from Payne, bolstered by fine turns from Clooney and Shailene Woodley as his eldest daughter, which takes you to another place then gives you cause to miss it, once it’s over. Mahalo, Alexander.