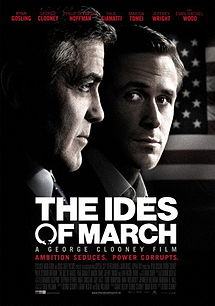 George Clooney understands the tension between the ends and the means. He staked his dignity and professional reputation on a grab for movie stardom, accepting the lead role in Joel Schumacher’s Batman and Robin. Fondling his rubber nipples between takes and being perhaps the first leading man in the history of cinema to hope his part would be cut in its entirety, Clooney must have justified the exercise to himself with the hope that a planned new wave of vital, interrogative American Political Cinema, driven by his star power, would redact memories of that debut.

This is a big ask from Clooney. Imagine Obama offering his tepid health care reform as absolution for drowning a toddler. Still, with every foray into American politics George edges closer. The actor, now a writer and director, has yet to make an essential comment on the subject; we await his Nashville, we’d settle for a Bulworth; yet he can boast a succession of cerebral, meditative treatises on the state of the nation: Oil drama Syriana, which he produced, McCarthyism memoir Goodnight and Good Luck and now The Ides of March, which as the title suggests, applies Shakespearian themes of succession anxiety and corruption amongst a retinue of close allies to the race for the Democratic Party presidential nomination.

As a bleeding heart Liberal you might have expected Clooney to focus on Republican machinations but where’s the currency in that, three years into a disappointing Obama presidency? Instead it’s a timely reflection on disillusion and the progressive values embodied by, and invested in, so called game changing candidates of the left; values tested against the pitiless beast that is realpolitik.

Clooney sets out his stall in an early conversation between Ryan Gosling’s idealistic campaign advisor and Marisa Tomei’s seasoned hack. Gosling is enamoured with Clooney’s governor, Mike Morris, despite Tomei’s warning that “he’ll let you down. They always let you down”. Undeterred, Morris has to win, thinks Gosling, because he’s the liberal dream made flesh: godless, pragmatic and socially progressive. Morris, whose easy charm and matinee looks recall Clinton, while the tinted campaign posters and one word slogan, “BELIEVE”, place the filmmaker’s tanks on Obama’s lawn, is, you think, probably too good to be true – yet wouldn’t it be wonderful to thwart Tomei’s cynicism? But Clooney didn’t make this movie to sell your dreams back to you. The establishment of Morris as a blank canvas onto which supporters project their aspirations, urges us to watch his pronouncements closely, conscious that like a real politician’s campaign promises, they’ll later mark his hypocrisy.

One such pronouncement, following an in no way incidental aside on abortion, shows us the rub. Morris, questioned on his “lofty” opposition to capital punishment, is asked how he’d feel about a man who’d murdered his wife. “I’d kill him,” admits Morris. Ah, says the interviewer, then why shouldn’t the state do the same? “Because society should aspire to be better than the individual”, the high-minded reply. Individuals are selfish, flawed and hypocritical but Morris posits the notion, the film’s notion, that adherence to a set of inviolate principles should overwrite individual concerns. The second act reveal of an affair between the Governor and a young intern, forcing Gosling to weigh the question against the greater good, consequently becomes our own conflict of interest. Should Gosling out the senator and destroy his campaign, use the information for personal gain or do nothing? It’s a question complicated by his character’s tie to Morris’ campaign principles, Molly – his love interest and the Governor’s shame, and the politics that underwrite politics.

Clooney’s film projects its disillusion with the political process onto Gosling’s broad shoulders. He’s a terrific lead, charting the path from naivety to enlightenment to raw calculation with smouldering intensity. With Bill Clinton’s near impeachment recent enough to still be a bleeding scar on the American left’s back, Ides of March throws up the question of whether America is, despite its progressive rhetoric, an immature democracy in hoc to monstrous priggishness.

A film that begins with Clooney’s candidate being lambasted for his atheism, “has an atheist ever being nominated for president of the United States?” asks a dry Paul Giamatti, ends with Gosling reminding Clooney that the American people will tolerate lies, war and bankruptcy but not “fucking the intern”. Naturally the plot, unfolding from Gosling’s perspective, requires you to share some of that imagined indignation and self-righteousness, though our proxy remains commendably conflicted, but the film’s critique of that hypocrisy is as loud and considered as its depiction of jaded politicos for whom politics is an end in itself.

“Win Win” is the phrase oft repeated, the notion that whatever the moral considerations, if the twin Gods of ambition and presentation can be satisfied then the job is done, but Clooney is clear that for the people who hope to be both represented and emancipated from special interests, it is, and shall continue to be, lose lose.