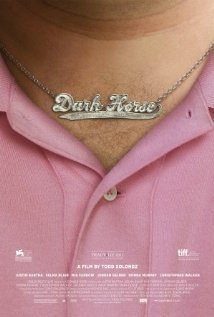 Jay and Mark Duplass did it better with last year’s Cyrus, but this is still a welcome, not to mention bleaker, addition to modern cinema’s passing interest in Generation X juvenilia. Hollywood’s reluctance to ridicule this cohort may stem from its near total reliance on them to fund its business model since the mid-70s, after all if it wasn’t for thirty-somethings like Jordan Gelber’s Abe, room stacked with action figures and fantasy movie memorabilia, we’d be forced to watch movies aimed at adults. The very idea of being dragged back to the Seventies, the period some dare call American Cinema’s finest, is enough to make you return to the womb in terror. Solondz, who makes movies for an adult audience, has no such qualms, and so pulls no punches when sizing up the baby boomer babies who daren’t stray too far from the teat.

This, echoing Soldonz’s previous investigations into dysfunctional and lonely people, is an adult take on perpetual childhood. Richard’s dark horse tag is one of its many cruel jokes; an expectation conferred on a difficult, needy child, in the hope that he harboured as yet untapped reserves of potential, brutally frustrated when the boy became a lazy, adolescently minded man who works for his Father and loathes his more mature, successful brother Richard, a Doctor.

As a study in failure, or at the very least a version of it (we’re reminded that it’s the norm for adults to live with their parents in some third world countries), Dark Horse is both astute and, like Abe, troubling. Whereas the aforementioned Cyrus had a certain sympathy and affection for its characters, Soldonz pities his, mocking the psychologically infirm Abe’s attempts at wooing the vulnerable Selmar Blair, and casting scorn, perhaps realistically, on the big baby’s dreams of aping his parent’s life of cosy domesticity (in the same house, naturally).

Abe’s parents, rendered lifeless and non-communicative by Christopher Walken and Mia Farrow, may be to blame for mollycoddling their son, but the film never asserts as much, instead suggesting, in allusions to a nervous childhood and therapy sessions, that Abe is a boy that never got his act together. That it’s a generational malaise is confirmed when Justin, a graduate of Generation Y, usurps Abe at Daddy’s company. The only woman genuinely interested in him is Donna Murphy’s older secretary, perhaps more out of maternal instinct than lust. There’s no one of Abe’s generation to confer legitimacy on his lifestyle.

Fans of Solondz will relish the film’s lashes of dark irony as well as its nihilist appraisal of life. There’s a sweetness to many of the exchanges between Abe and Miranda, an unlikely and broken couple, and levity in a clutch of enjoyable fantasy sequences that articulate Abe’s various hopes and grievances, but there’s no hope in it, and consequently those accustomed to the kind of payoff that accompanies the character arc in a mainstream Hollywood comedy, may find themselves standing in the rain with their dick in their hand.

Solondz would say that he’s not making a fairytale of course, he’s documenting with jokes. This isn’t a movie that offers a prescription for Generation X’s ills; it’s not aspirational or optimistic; instead it holds up a mirror to the fearful and the uninspired. Dark Horse therefore manages to be both tragic and relevant, if lacking the impact of Solondz’s best work.