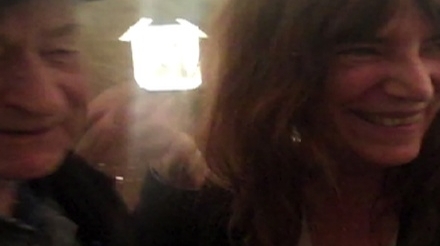 Marie Menken of course, was a filmmaker. Perhaps she’d have used a camcorder, were she active now, but one would hope not; it’s such a crude tool for capturing life; it’s like using the pit of a spoon to spread butter on toast.

Mekas uses it, or more accurately holds it, and the result tests the patience. How we loathe the auto-focus and the built in microphone with its sonic-farts and ambient hum – white noise on the screen and on the soundtrack. Then there’s the harsh lighting, the frequent jerks, the guestimated framing; shots of floors, hands, arms – half a head, half a character. One of Mekas’ subjects has to remind him to point the camera at her face as she speaks. We understand the spontaneity, the sense that this is how it was at the moment of acquisition, but it’s an awful waste of a machine. The camera is the one character in this drama that doesn’t get to participate. This isn’t filmmaking.

Experimenta is by definition, self-indulgent, because the auteur, if you want to be generous, is inclined to care more about the form than the content. Nevertheless, Sleepless Nights Stories is more self-involved than most. Mekas is an interesting man; he’s an artist, he likes film and music and literature; his friends are thinkers and feelers and drinkers; he visits photography exhibitions and performance art shows in which men slowly raise violins above their head, as though gaining a musical erection, before smashing the instrument on a lectern, ejaculating maybe. Despite this, and despite Mekas’ woolly-minded reflections on reincarnation and nature, delivered in the register of a child for whom everything is a novelty and an open question, the demand that we should care is too great. The film excludes us utterly; we’re not involved. It’s too fragmentary, too contingent upon our familiarity with or empathy for the people on screen. Cameos from Bjork and Yoko Ono don’t help.

A revealing scene, sometime in the second punishing hour tells the filmmaker’s story. Mekas is patronising a friend’s photography exhibition when she notices him in the crowd with his camera. We learn she loved his last film; she goes on to compare him to the one bone-fide pioneer of cine-lyricism, a man who truly could create poetry on film, Andrei Tarkovsky. The comparison is absurd but its inclusion in the finished film is telling. Vanity makes the final cut. The difference, if it needs clarifying, is that Tarkovsky never forgot about his audience. Mekas has made a film for his social circle and himself. We should leave them to it.