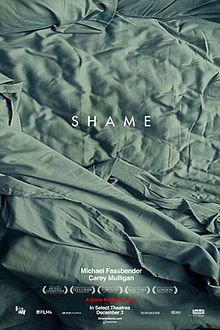 Few films sate an audience’s prurience like Shame, or provide a more acute character study and psychological mystery; few films are so adept at the act of looking as their protagonist looks; focalisation that apes total subordination to the sexual imperative; framing at waste height, focus pulls to wedding rings, long libidinous stares across a room toward a lusted object. Michael Fassbender, playing a man harbouring a consuming, unbaiting libido, notices things; he remembers the colour of a woman’s eyes after first glance, the full lips of co-worker Marianne, the woman on the subway, and we notice them too, thanks to McQueen’s subjective camera.

This, however, is not a world of eroticism or poetry, there’s no romance in Brandon’s sexual odyssey. It’s cold, de-saturated and impersonal. He’s introduced to us in bed, staring at the ceiling, dead eyed – he could be dead; as the film continues you’re conscious that this is not a premature diagnosis. If Brandon is sex addicted, as the synopsis claims, then it’s an addition to junk sex, self-abasement and pornography; frequent and pain faced masturbation. Brandon’s sexuality is warped, degraded by the frequent use of prostitutes and pay sites. His life is a necropolis for intimacy. The question for the audience, prompted by the arrival of Carey Mulligan’s Sissy, self-harming, fragile and loose, is whether the shame of the title is a symptom of their lifestyle or its cause?

McQueen doesn’t judge the brother and sister, nor does he cut through the guarded veneer that characterises both. There’s no third act disclosure to link the clues seeded throughout. Outsourcing judgement to the audience made Hunger, McQueen’s debut, an immoral film, but here, that same arms-length sensibility gives the audience room to investigate. Have both brother and sister been abused as children? We’re never told. Yet the palpable sense of self-loathing, from the first words spoken to Brandon, albeit in an innocuous context, “I find you disgusting”, to the fury with which he ejects his sister from his bed when she climbs in for warmth, all points to an unspoken trauma that has made sex like picking a scab for him and throwing yourself at anyone who shows an interest, a necessity for her. “We’re not bad people, we just come from a bad place” she tells him, but we never learn more about that place.

Shame is explicit but it’s the antithesis of the pornography that Brandon consumes. This is sex like drug use; ruinous and free of eroticism. Brandon’s need for a hit extends, out of desperation, to visiting a low rent gay club when refused admission to his usual hunting ground. Sissy, in contrast, is apparently without shame; standing naked in the shower in front of her brother, in one of a handful of sexually jarring scenes between the two, making begging phone calls to her ex-boyfriend, promising to validate his possessiveness in return for the restoration of the relationship. Parents are never discussed, a reference to the family batted away during Brandon’s one healthy, but doomed dalliance with a co-worker; it’s a film that gives you much but tells you nothing.

McQueen is to be commended for making a film that’s blissfully free of piety or prudishness. He favours long, revealing takes; intensity, silence and an aesthetic that foregrounds the tone of the film, eschewing heavy handed symbolism – for instance Brandon’s cold blue and white apartment and a blues bar in which Sissy prostrates herself on stage. The allusions, in dialogue and, in one heart breaking scene, a bluesy, unbroken rendition of New York, New York, provide an emotional register for the characters, occasionally giving brief excerpts from their internal monologues. Shame is therefore artistic film making in the best tradition; a carefully crafted curiosity that gives a grateful audience the opportunity to get involved, rather than merely observe. Fassbender and Mulligan are mesmerising. What more do you want?