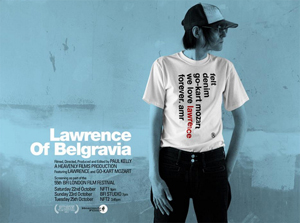 This profile of failed alt-pop musician Lawrence Hayward, formally of ’80’s outfit, Felt, is a piece of pure schadenfreude; an addition to the Tin Ear genre that began, as satire, with Rob Reiner’s This Is Spinal Tap, and the Comic Strip’s Bad News (on television) before emigrating to reality with the likes of Sacha Gervasi’s Anvil! The Story of Anvil, a film that so closely resembled its comedy forbears that those unfamiliar with the band questioned its authenticity.

The shift came from the realisation that the industry’s refugees and aspirant breakout acts were equal to the ridiculants of the comic imagination. The film industry vomits up the self-important and the sycophantic, but only in the world of the failed musician will you find the alchemic base properties of narrow self-belief, pretension, sweetness, accidental wit and heart; the stuff that turns vérité into gold.

That isn’t to say that Paul Kelly, handing his subject length upon length of rope, doesn’t hope that the self-proclaimed “moribund” front man won’t hang himself, but he resists the chance to tie the noose in the editing suite, commendably allowing just the odd cut away and empty stare from those that cross paths with the man, to suggest why this contemporary of The Smiths is still on the dole in his fifties. One can see Lawrence’s motives for participating; vanity and publicity; but for Kelly, as for the audience, there’s guilt and pity, sympathy and cynicism.

Lawrence himself, named in honour of T.E Lawrence, though he dryly notes that his parents may not have known their chosen moniker wasn’t the man’s Christian name, is the documentarian’s dream; he’s embittered and genuinely perplexed by his lack of success – an unreconstructed relic from the early ’80s, oblivious to and contemptuous of, the trends of the intervening years.

Kelly’s film, judiciously laying track upon terrible track from Lawrence’s latest band, Go Kart Mozart’s record, On the Hot Dog Streets, over low rent London vistas, shares none of the songwriter’s confusion in pinpointing the cause of his deferred success. The music is 4th rate Joy Division with an aimless post-punk aesthetic. In Lawrence’s mind he’s recording the music Bob Dylan may have written, “if he’d used a synthesiser”. In reality he’s playing the tunes Ian Curtis would have performed, had the depression been an affectation and the band, a holiday camp cabaret outfit.

That isn’t to say that Lawrence isn’t endearing; his lack of self-awareness walks hand in hand with his tenacity, so much so that it draws a begrudging respect from the viewer, but it’s sobering to hear a 50 year-old sing self-penned ditties like “Vagina’s allure” and “Electro-Sex”. You think of Spinal Tap and that damning album review, ‘they are treading water in a sea of retarded sexuality and bad poetry.’

“The only reason Felt didn’t make it was because John Peel didn’t like us”, Lawrence contends bitterly, citing the influential DJ’s denunciation of their debut album, Crumbling the Antiseptic Beauty; a title that was, for Peel, the worst of all time. Still, the late radio leviathan’s judgement was nigh on note perfect, and Kelly’s film vindicates him absolutely.

Perhaps, you feel, Felt did have something, or the stuff that something is made of, but the years saw that talent devolve. Kelly suggests as much, recalling that former Felt members were invited to join more successful outfits such as Primal Scream and Saint Etienne, while conspicuously, Lawrence was not. ‘I wouldn’t play on someone else’s record’, he tells a music journalist. Did many ask? We never find out, though we have our suspicions.

Lawrence of Belgravia has an undeniable allure, like those vaginas. It’s a fascinating portrait of burning ambition without the talent required to satisfy it. The singer’s confusion and despondency at the close is the only real thing about this journey – the rest, you feel, is pizza and fairytales. “Women don’t know this but men fall in love in a second” he tells us in one of many homespun asides. It’s apparently later, when you get to know the object of your desire, that disillusion sets in; that the fantasy dies a slow death. This is Lawrence’s gift to Paul Kelly – a plumb metaphor for his musical odyssey.