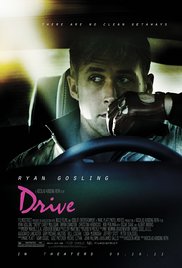 Your face says it all

Warning: A couple of scenes have been mentioned that may give away the plot

The distorted voice of Kavinsky and Lovefoxx hand in hand with the thumping rhythm of their song “Night call” pulsates through the first five minutes of the film, where no dialogue is apparent, only atmosphere, and a tense one at that. Ryan Gosling, only known as ‘driver’, is cast into shadow as he waits in his vehicle for his next job as a getaway driver. The lack of communication between him and the criminals he is driving to safety, the ticking watch attached to the steering wheel and the harsh glances into his rear view mirror really emphasise the suspense of the opening scene. Gosling’s facial expression shows he is calm, in control and skilled. With the pink coloured opening credits, it feels like something out of Grand Theft Auto, carried by the eighties-like soundtrack and Driver’s scorpion jacket.

The dismissal of dialogue continues throughout the entirety of the film, and body language dominates, from the slightest twitch of the mouth to Driver’s rarely appearing smile. Providing yet more tension, the effect it has upon the romance within the film is pleasantly frustrating. Driver and his neighbour Irene (Carey Mulligan) gradually spend more time together, their eyes being the only indication of how they feel, which becomes particularly important when her husband Standard (Oscar Isaac) leaves prison. They don’t discuss their relationship, and physically it’s barely evident that there’s any chemistry at all. However, long takes capture their frequent glances for longer than what is considered comfortable, which heightens the anxiety for audiences.

The same can be applied to the slow motion technique used on the action scenes; the highly graphic but periodic shots are terribly bloody, stressing the anger contained within Driver and the human being’s ability to hurt its own kind. Blood spatters across a mirror as a girl’s head is blown to pieces, while not soon after a man is stomped to death, with only the noise of his squashed and mangled body to indicate his fate. Cinematographer Newton Thomas Sigel balances the beauty of the film as he has captured a variety of shots containing the Los Angeles sky line at night. He focuses on the twinkling of streetlights amongst traffic and the lighting within the driver’s car when he is at his calmest is dim, much like the rest of the film where hiding in the darkness is key to survival.

Gosling is highly appealing to watch; he remains silent and stern, the violence that erupts from him is unpredictable as his tough attitude is written all over his face, and does not need proving. His role is a complete contrast since The Notebook (2004), and it is a pleasant surprise to watch him produce such a complex and mysterious character without having to do much persuading at all. Driver has a part time job as a stuntman, as well as working in a garage employed by Shannon (Bryan Cranston), film producer Bernie (Albert Brooks) and his partner Nino (Ron Perlman). With so many car related jobs, it is unfortunate that there is not as many car chases or driving in general as expected. However, when the double crossing begins and Standard can’t fight his own battles once out of jail, Driver takes it upon himself to protect Irene and her son and the very limited amount of characters soon become linked by a job gone wrong.

The structure of Drive as a whole felt exhilarating despite how mismatched it would seem amongst films such as Transporter (2002) or any of the Fast and Furious films, which are full on and action packed to the brim with dangerous car stunts. Drive is rather a relaxed and patient film, much like the protagonist, and has benefitted from such an enchanting soundtrack which successfully fills the gaps where a script should have been.