The Ooh Tray is getting the FEAR ahead of Film4 FrightFest

For many of you the August Bank Holiday weekend means dull barbeques with middling friends, not to mention the enjoyment that comes from watching flies land on your food and defecate. For others however, it’s a time of unimaginable fear and suffering, albeit in good fun, with the annual arrival of the FrightFest Horror and Fantasy Film Festival in London’s Leicester Square.

Ghouls, demons and serial killers take over the Empire Cinema from August 25th-29th; yes, even more than usual, and a typically lively programme threatens colourful nightmares. It’s hell on Earth but it’s also one of the most intimate, good natured and enjoyable weekends around and The Ooh Tray, though sensitive and prone to the sunflower soiling of virginal bed sheets, will be in attendance, providing you with sickening tracts on the latest missives from depraved minds.

Also on the bill, the world premiere of A NIGHT IN THE WOODS, starring Scoot McNairy (MONSTERS) and Anna Skellern (THE DESCENT: PART II). This Richard Parry directed shocker details what happens on a camping trip in Dartmoor’s Wistman’s Woods, so named because of its legendary haunted past. Our review will follow shortly thereafter, provided we make it.

Guest patrons in past years have included Uwe Boll, Jonathan Ross and Justin Lee Collins, though don’t let that put you off.

There’s also a bountiful programme of horror shorts and experimental shocks on the Discovery screen. Something for everyone then, plus a rare chance for gore whores to mate.

Look out for our reviews over the next week or so. If you’re attending enjoy, but The Ooh Tray politely requests that you turn off that fucking phone and take your hand off its leg.

Tickets for individual films are still available. Bookings: 08 714 714 714 or www.empirecinemas.co.uk 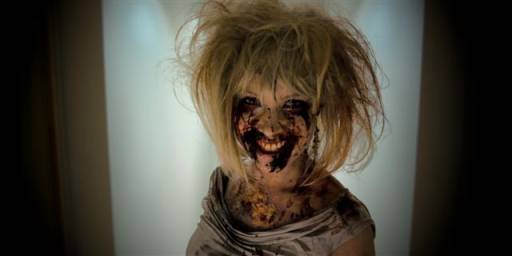